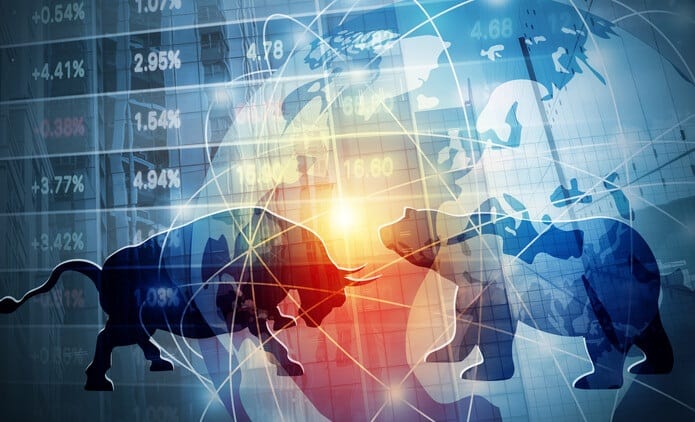 S&P is regarded as the “real stock market” by many investors and quite a few made a fortune (on paper) investing in S&P listed stocks.

Are S&P stocks the best of breed? Or will find good picks on the Dow Jones, NASDAQ or Russell?  SMB’s look like they’re in trouble, along with tech stocks who are vulnerable to interest rate rises. Inflation is high and government is obsessed with controlling inflation, and inflation is set to high for at least a year more.

As this chart shows, the S&P enjoyed a phenomenal bull run, much of in the last few years due to stimulus spending. But now in the era of Fed balance sheet tightening, interest rate rises, high oil prices, rising interest rates and a potential small business and housing market collapse, is the S&P now a call to doom?

Experts Not Offering a Positive Outlook

The Bank of America just revised its year-end target for the S&P to 3600, down 20% from its previous prediction of 4500 with earnings per share falling from $221 to $218. BofA predicts it will stretch 5 consecutive quarters through the first quarter of 2023. BofA also believes the Fed will stop interest rate hikes in 2023, yet inflation is not expected to subside, and 2023 is only 5 months away.  July and August CPI numbers will color the picture for late 2022.

Michael Kantrowitz of Pipe Sandler has revised his earlier predictions, saying “with earnings expectations likely souring along with a weakening economy, a bottom won’t form for this bear market until later next year.”

For the last 6 months, S&P stocks have shown in the red. Experts are divided on the stock market ranging from stock market crash predictions to solid earnings ahead? Which do you feel is legitimate?

Some investment advisors have suggested buying a basket of S&P stocks or finding specific value stocks that will outperform the S&P, Dow, and NASDAQ.  2022 will likely be a year of picking winners. Let’s take a closer look at which S&P stocks are improving.

Barchart’s weighted Alpha stocks show overwhelmingly that energy stocks are high performers (bargain retail, microchips and military stocks are up too).  If China reopens, will oil prices rocket to $140?  Are they the only securities to consider buying given energy production is at its peak?  But if we’re at the bottom of this downturn, is this a buying opportunity for all stocks?

See more on signals of stocks to sell, and on the best stock picks of 2021.  Which post pandemic stocks are best and check out the best stocks on the Dow Jones and NASDAQ indexes.

For newbie self-directed investors, you can learn learn more about the S&P below and be introduced to the listed stocks below. You’re looking for the best performing S&P 500 stocks to invest in and you’ll find them here too. In fact, you’ll discover that certain stocks on the S&P 600 are actually outperformers.

Last year, some forecast modellers actually had the S&P 500 predictions seeing heights of 6,000. One expert whom most people ridiculed two years ago said it would hit the unrealistic price of 3500. Well it hit 4,162.

Today, history showed everyone what they should have expected. When you pour $5 trillion into an economy recklessly, it will come back to haunt. With that surge of liquidity still evident (consumers are spending), there is little way that high inflation will cease.  With the Democrat government acting as it is, a recession is the outlook and that will push the S&P down this year and into next.

The calls for a bull market forecast have a weak case. Investor’s will have to research and find only the best of the S&P stocks, and there might not be many.

Barchart gives us a good look stocks that are plummeting and show big downside risk. Retail, travel, among a host of companies we’re used to seeing soar. With President Biden making scary nuclear deals with Iran to get the price of oil down temporarily and China buying coal and Russian oil, you can see a big mess coming.

The key to this is oil production is at maximum unless US oil production is rekindled, and the Biden camp has vowed solemnly to stop them.  With the US dollar rising, and China imports flowing into the US, US company are in tough for the rest of this year and into 2022, until the Republicans can act to stop the bleeding.

Currently, many investors have ploughed money into Cryptocurrency and Tesla/EVS. Those are decidedly risky and volatile (old comment), and now a year and a half after posting that, these stocks are looking troubled. Elon Musk is behaving like there is big concern for EV auto sales ahead.

The S&P, DOW have shown moderate volatility and similar returns while the NASDAQ has suffered much more ups and downs, which might appeal to day stock traders.   Investors are uncertain right now and are reviewing forecasts and predictions for today, next week, next month and 6 months.

Companies listed in the S&P 100 such as Pfizer, Walgreens, Coca Cola, Apple, Pepsi, Chevron and GE look pretty good headed into 2022. Check them out further on Barchart.com and for more on the S&P 100 forecast.

This chart below reveals the S&P 600 has performed the best. Find out which S&P 600 stocks have been pushing its price performance in the last 6 months.

What is the S&P index?  The S&P 500 or Standard & Poor’s 500 Index, is a weighted index of the 500 largest U.S. publicly traded companies (large-cap U.S. equities). The index has a 69.0% trailing 1-year total return. It’s a measure of how well the top US corporation s are doing. It can be contrasted with the Russell Index which is a measure of small to medium-sized companies. The Russell Index has actually performed well in 2020, and warrants a good look for investing.  Check the Dow forecast and the NASDAQ Forecast too.

The S&P delisted Facebook as an ethical company, and we wonder if Google is next, having been convicted in Europe of anti-trust violations, and preparing to defend a US FTC investigation.