Apple is one of the 5 FAANG stocks which currently are the essence of the US stock markets.  Apple has enjoyed a phenomenal growth in stock price coinciding with its persistently strong brand and monopoly market share.

The big Apple news is the announced 4 for 1 stock split which will happen Monday.  It’s split its stock before several times and APPL stock price has risen 10% by 12 months later on average.

That suggests APPL will move from its current price of 501.45 after hours, will be split to 125.36 and then rise to 137.09 by Sept 2020.  Is 10% per year enough at a time when the company is appearing in DOJ investigations and is embroiled in a new legal battle with one of its most popular customers over commissions?

This time Apple is trying reach retail investors who are coming into the market.

Apple offers services including its iCloud service, Apple TV, and Apple Music which are lucrative and growing.  And well employed US consumers can afford its premium priced iPhones. Find out more about the company and its outlook below. 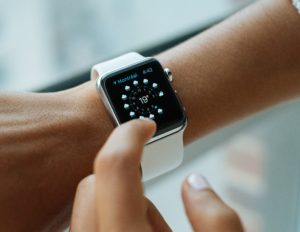 It’s hard for any investor to ignore that the company’s market value has surpassed 2 trillion dollars.  Apple’s stock price hit an all time high last week at $505 a share, up almost 50% over 2019, yet as you’ll note in the chart below, the price historically tends to be on a roller coaster path.

I asked previously if you should buy APPL amidst a Trump fueled economic improvement that Apple does not believe in.

Or is Apple one of the companies that contributes the most to the US trade deficit and thus ready to be hit somehow by President Trump.

If the Dems impeach or thwart the President’s economic ambitions, consumers will likely not keep shelling out for Apple’s high priced iPhones when the economy dives. See our picks for best stocks to buy in 2020.

Its corporate revenues in 2019 however, have declined due to lower sales in Europe and North America.

“Our year-over-year business performance improved compared to the March quarter and drove strong operating cash flow of $11.6 billion,” “We returned over $21 billion to shareholders during the quarter, including $17 billion through open market repurchases of almost 88 million Apple shares, and $3.6 billion in dividends and equivalents.” said Luca Maestri, Apple’s CFO.

It seems Apple is a comfortable investment for safety investors looking for regular dividends. But is it really a compelling buy? You can see some analysts recommendations below. Despite Apple’s strong revenue performance with the iPhone and Apple TV, the trade barriers loom as a formidable challenge to the company’s marketshare and sales. Competition with Google, Amazon, Netflix, Samsung, and others will become more intense.

Due to the threats, Apple is shifting from hardware to more a more service based business model. Apple TV for instance could add $6 billion annually if it fares well against Disney and Netflix. It’s Apple Watch, AirPods, and Beats headphones actually grew 50% in sales.

According to the Fool.com, Apple raked in $58.2 billion in free cash flow in the trailing-12-month period ending June 29th 2019. Apple then traded at 18 times its annual free cash flow compared to Microsoft at 28 times cash flow and Google Alphabet trade at 31 times free cash flow. The Fool expects Apple to grow earnings about 9% annually over the next 5 years. Apple’s stock price then might be undervalued.

Apple gives away free things to iPhone buyers such as free Apple TV+ streaming for one year. That kind of incentive packaging can create new customers and keep them loyal.

Apple is a company built on innovation in design, and has built a powerful brand that holds significant loyalty. However, younger technology buyers tend to be brand agnostic and Apple manufacturers its products in China.

Given Apple’s precarious place of manufacturing, you’d think Jim Cramer and other forecasters and analysts would be very nervous about buy recommendations. Although President Trump is announcing a China trade deal, the rhetoric and actions on both sides suggest otherwise.

The Street offers the following stats on Apple:

Apple is one hot stock loaded with potential given the company’s history, marketshare and brand value. Will it make the transition to a service company given the competition in services, and with trade wars growing? Or will it land in no man’s limbo as master of none?

This is not a recommendation or advice on to buy Apple stock. Hopefully, this information will aid you with an initial overview of the company and its market and economic climate.  Despite the great earnings and stock price performance and record stock price, Apple faces significant threats in 2020.  Is it headed for GDPR sized fines from the EU and anti-trust fines in the US?

The analysts like Apple, but its price and dividend performance are highly dependent on trade deals and tariffs. The company doesn’t like to make things in the US, but just to sell them here.