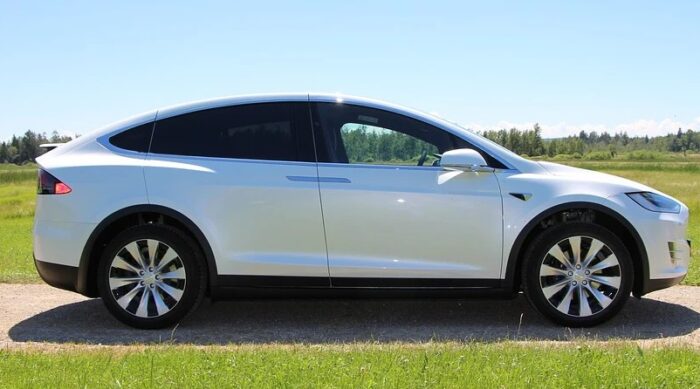 TSLA Tesla stock was one of the darlings of the stock market during the Covid 19 pandemic period.  The rise of TSLA’s price created plenty of millionaires including the company’s management staff.

Since then a number of dampening factors might suggest we designate Tesla a stock to sell. And as Tesla struggles with its own issues, a bevy of amazing competitive EVs about to kick butt in this sector.

Demand for EVs May be Artificially Inflated

With the price of oil at $72, and forecasted for above $80 by the fall, you’d think it would be a sale bonanza for Tesla stock, yet the markets have begun to shun the stock.  A new report says Tesla’s former CEO has sold 274 million dollars of his own stock. It seems a bonanza for CEOs, but is there value for investors?

Global EV consumers aren’t wealthy and they will still be buying with an eye on price and utility. The price of electricity in some US states such as California is prohibitive as this chart below depicts. The cost of it isn’t discussed, but in California’s summer heat wave, California’s are being asked to conserve. 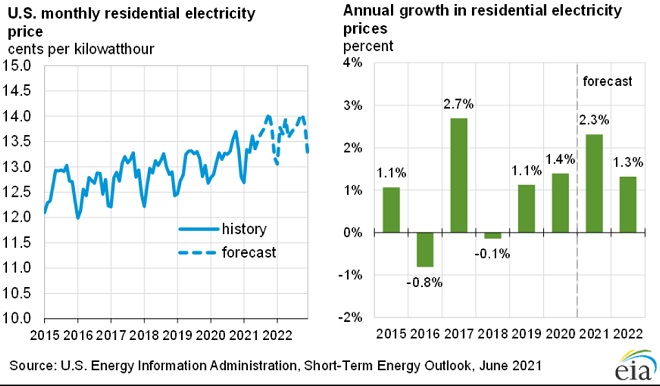 There are bumps in the EV road, including rising sticker shock and beyond EV range worries. In the US, Tesla’s market share and sales are beginning to slip. And suspiciously, EV sales reports for 2021 are going missing in action. It’s a signal investors should be paying attention to.

Yet doubts about EV products are here. And Tesla is getting shorted on the stock market again according to Barron’s.  Demand across the world is still not for plug in vehicles, but for more appropriate gasoline-powered vehicles. There are no rebates for EV purchases in most countries. Mass production of gas powered cars is easier and refueling stations are part of infrastructure around the globe.

Electricity won’t be getting cheaper as demand increases, and as the economy slows in the next 5 years, consumers may balk at the high costs of Tesla vehicles.

Consumers understand these vehicles and can drive them long distances. As demand in the post pandemic period heats up, consumers will buy gas powered vehicles. Cost is just one factor, but it’s getting more attention.

Tesla’s stock price performance has been prolific and while being constantly criticized, the company has been able to leave California’s high tax environment (a democrat state) and ramp up production in the 1st quarter 2021. Yet as the pandemic recession comes to a close, some of the impractical ideology that drove sales may wane through 2022.

Tesla has dominated the EV market for some time, but new entrants are putting pressure on the company.  We can’t forge Elon Musk’s comments about getting flattened like a pancake by big competitors and that the company could get bought out by a major manufacturer. Smart people read between the lines.

Right to the Heart of the Matter

Are Tesla’s the most cool electric vehicles on the market? Are they cheap and within reach of consumers. Well, take a look at the Cooper mini EV and Chevy Bolt and whether consumers might find them attractive. Compare prices to the Tesla models, and ask yourself who is buying EVs.

If Toyota, GM, or Ford’s push into the EV market is real, the Musk’s comments are definitely forward looking. Ford just announced it’s new electric Ford 150, the EV version of its wildly popular truck. Cybertruck has not come to the rescue. The price of Tesla stock dropped on the reveal of the new Ford truck.

Tying Tesla to Bitcoin is Not a Sound Move

Tesla is not Bitcoin, and ploys to make money off of an unregulated, unsupported cryptocurrency is bad judgement when a company is in a battle in its market.  The electric vehicle market has been artificially inflated by the government and would never stand on its own. And in the midst of the artificial support is a lot of competitors.

Musk and Tesla bought a lot of Bitcoin and desperately, he said they were going to hang onto it with diamond hands. But Bitcoin has its detractors and it could drop like a rock at anytime.  Musk doesn’t fear risk or playing at the casino, but most often the casino takes all of your money.

Bitcoin is down 12% this morning in trading below $34,000 now and Musk has his feet cemented in. You can learn more about cryptocurrency, but EVs and cryptocurrency are unrelated businesses.

Find out more about EVs on insideevs.com  You’ll see excellent competition including Fisker, Lucid, Volkswagen, Ford, Lexus, and Mercedes Benz.  These are companies with strong brands and loyal customers and now they have products developed and ready to be bought.

Tesla’s forecast for 2021 appears promising, but what the industry isn’t reporting is the sales growth forecast for the rest of the EV manufacturers.  Tesla as well appears to be totally reliant on one vehicle, the Model Y.

The EV market continues to be dominated by Tesla, which sold an estimated 69,300 vehicles in Q1 and remains the only significant automaker in the U.S. with an EV-only lineup. Tesla accounted for 71% of total EV sales in the quarter, down from 83% share in Q1 2020. — from Reuters report.

The new Tesla Model Y is the best-selling EV in the U.S., followed by the Tesla Model 3. The Model 3 was the No. 1 best-selling EV in 2020, but sales in the U.S. market declined by more than 50% year over year in the first quarter of 2021. The Chevrolet Bolt was No. 3 on the EV list, with nearly 10,000 sales in the quarter. The all-new Ford Mustang Mach-E, which went on sale in December, was No. 4, outselling both the Tesla Model S and Model X.  — from Reuters report.

First, China gave Tesla the gears by blocking its future in China, and now China’s communists regime also saying that won’t allow Bitcoin as a transactional currency. That’s the first step in booting Bitcoin and non China cryptocurrencies right out of the country.

If Tesla sales revenue picture was built in China sales, then the company’s outlook might be dimmer than anyone believes. And with commodity prices rising, who will be able to afford the high priced Tesla models?  The recent Battery day turned out to be all hype and propaganda, a big hype fraud playing up the media who seem to be willing to let it go. It was all about a experimental battery that won’t be available for a long time. If you’re cautious investor, you might see these promotional events as a compensation for real weakness.  The truth is often opposite to what is said by corporations.

Unrelated but important is the law suits against Tesla for its solar roofing product. Solar roofs were a trendy product, but what is the liability when they have problems? Tesla about to find out as California decides to handle the lawsuits as on e big class action suit. California lawyers love stuff like this.

Tesla Ratcheting Up for Big Sales before 2025

Yesterday’s announcement from Tesla regarding the sale of $5 billion of Tesla stock had investors reacting negatively. However, tonight in after-hours trading, the stock jumped to $659 a share.

Given how well the price of Tesla stock has performed, Tesla’s selling of stock to fund growth is a wise choice. It’s another sign to investors that Tesla will grow and become the company many expect. Read more on Tesla, it’s history and business units.

Tesla is a fascinating company to study and invest in. Do you plan to buy Tesla stock this year? Please leave a comment regarding your investment attitude toward Tesla stock. How high do you believe Tesla’s stock price could go, or do you see other EV manufacturers blowing away Tesla?

Not many stock analysts are offering up 5 year outlooks for Tesla Stock. Of course, when you do, it can make the expert’s look bad when the price misses by a lot. Better not to do 3 year or 5 year forecasts if image is the priority.

However, it’s uncertain how many cars they can produce up to 2025 via their two new manufacturing plants in Germany and in Texas. So many variables, so we have to rely on reliable estimates from the major stock advisors such as Motley Fool and others. The established brokerages have missed out on recreational investors love of this stock and the company.

A tripling of the stock isn’t out of the question as the pandemic ends mid-June and the economy stimulates a lot of car buying. Gasoline prices will climb, and car loan rates will still be very low making EV car purchases a likelihood.

This chart shows Tesla’s price was up over 300% last February before Covid 19 was imported from China. What other stocks were rocketing before the pandemic? They might be worth watching now as the vaccinations begin.

Back then, the Fool cited 5 factors that drove the price then:

There’s plenty who still believe the price is looking a lot like a SpaceX rocket during launch. This is an exciting company with an attractive brand and growing revenue base. Experts believe the company will become a true digital company via software subscriptions, not just auto sales.

Tesla’s stock price has doubled in the last 3 months and has jumped 700% since March. Every time skeptics predict a crash, TSLA just keeps on climbing. There is speculation about who is so negative toward EV technology and Tesla, but we shouldn’t dwell on it.

Change always brings resistance, and Elon Musk really pushes the envelope on market-changing innovation. There’s a lot of pension funds that are fully invested in the Big 3 and Japan automakers and feel threatened by Tesla’s strong brand.

Young investors, likely via Robinhood have overwhelming faith in the upward forecast for Tesla Stock.

Yet the company is building factories to ramp up production numbers to Toyota/GM volume. Tesla will face opposition. For instance, today, the German manufacturing facility was held back by “snake protectionists” who say snakes will be endangered by the new facility.

Becoming the biggest company in the world isn’t easy. Yet investing in Tesla doesn’t seem like a gamble anymore. Its global sales potential is unbelievable.

Sales of EVs in China could jump in the next 2 years to close to 3 million which means Tesla may sell a lot of cars. I have always believed that China would not allow any foreign company to own a market in China. But if Biden jumps up imports of China goods, Tesla might be allowed to sell more EVs there.

Google, Amazon and Facebook however shouldn’t hold their breath as the communists stick to their China-company only world domination supply chain.

With growth in Germany, Europe and China, Tesla is positioned for incredible growth. And those SpaceX rockets and Youtube videos will only make the brand very attractive to future EV buyers around the globe.

There are a lot of factors pushing Tesla stock ever higher. Here are a few:

Please bookmark this post for continuous updates on Tesla and the TSLA stock price.  Learn more about the Tesla Stock Price Forecast , Stock Market Predictions fore 2022 and about a potential Stock Market Crash in 2022.