Tesla is the world’s premier electric powered automobile manufacturer and has built a very strong brand reputation among auto buyers who prefer a new era of environmentally friendly, clean energy powered vehicles. Tesla is reputed to own 68% of the EV market.

The company also manufactures rechargeable batteries, solar panels, and solar power systems.  The company is a leader in robotic technology and refers to itself as the world’s biggest robot company.

If investors might are conflicted about whether to buy TSLA stock, it’s understandable. On the one hand, Elon Musk’s electric car company is the poster child for the Dem’s ESG, green new deal agenda.

Yet, Musk himself doesn’t maintain a good relationship with that party or it’s leader. In fact, after Musk made some claims about self-driving car, it was announced this week that a criminal investigation was being launched against him. If the Dems lose the Nov 8th mid terms, it will be more difficult for the Dems to block oil production to keep gasoline prices elevated. If gas prices were to fall strongly, demand for EVs would fall.

A poll by sloanreview.mit.edu found that their expert panel believes Tesla’s dominance in the electric vehicle market is over. Yet they believe the company will remain a key player in the sector. They suggest also that companies such as Daimler, Toyota, Ford, GM and Honda lag far behind Tesla in producing their own battery cells, providing their own charging infrastructure, and developing their own software.

We should keep in mind that experts were in disagreement about Tesla’s future in this market back in 2017.  5 years later, Musk has built a trillion-dollar powerhouse of technology and sales.

Tesla plans to raise sales of its Model Y and Model 3 electric vehicles sharply higher in Q4, 2022 and progress further in 2023 as their newer factories in Austin and Berlin increase production. Those 2 models comprise 95% of Tesla’s total output.

This infographic from Statista shows Tesla has the largest market cap of any car company by far. Market cap tells investors a lot about Tesla’s manufacturing, financing, and sales power.  Musk’s company has shown its ability to innovate and build leadership in batteries, recharging stations, and software development. It is the digital services offerings that experts believe has the greatest revenue potential in future.

A look at Tesla’s financial and manufacturing growth would make you feel tsla stock is the first on your list.  Tesla’s Q3  earnings report is impressive. However, there’s more than meets the eye and the earnings reports.

As the report’s financial summary shows, revenues are up 55% vs one year ago (now $21.5 Billion) and total gross profit is up 47% YoY. Amidst that, expenses are only up 2%.

Tesla is listed on the S&P and NASDAQ exchanges.

Experts typically don’t believe Musk’s ambitious forecasts for sales and production, but how the market could doubt the performance of the company over these last 3 years is hard to comprehend. The rate of growth during a period of supply chain issues is phenomenal. Now that the pandemic is residing, production likely will hit the number’s Musk predicts.

According to Autoblog, Tesla has forecast production of 1.59 million Model Ys and Model 3s through the first 3 quarters of 2023 would put it on track to end year above 2.1 million sales of EVs.

The bad news is the company is losing market share to competitors. However, Ark Investment’s Cathy Woods mentioned that GM and Ford have big hurdles to scaling up for the EV market. Woods continues to mention the profitability of self-driving cars which are still a long way from going mainstream even in California.

Wood’s bold statements about gasoline powered cars being obsolete and unsalable in 5 years is clearly ridiculous. Her beliefs are based on Dem regulations and high oil and gasoline prices. In fact, oil output could return to pre-covid levels and we could prices drop to the $65 a barrel level or lower which the EIA keeps forecasting.

With further demand destruction of gasoline expected in the 2023 economic slowdown, oil prices could drop considerably further. The prediction of high gasoline prices does drive sales estimates of Tesla vehicles.

Additionally, TESLA electric trucks, transport trucks and robotaxis will require huge amounts of investment to build, retool, and push through their respective channels.

Tesla’s price earnings ratio currently is an ultra-high 76.93.  Toyota’s P/E ratio is 28 and GM’s is 5.86. Barchart has a sell rating for GM and Toyota. Obviously, the rating is not based on earnings, but rather on speculation about the forced obsolescence of gas-powered vehicles.

As expected, Barchart’s analysts believe you should not buy TSLA stock and sell what you have.

How About the EV Competition?

The rise in price of TSLA stock as the Yahoo Finance chart below reflects why it is the most researched equity. The stock has risen 8 times its value but is Tesla still a good stock to buy. Some consider it one of the best stocks to buy. given Fed stimulus support for climate change, government incentives, and a growing preference for EVs.

An amazing year for Tesla in 2020, where the TSLA stock price rose from $95 per share to its highest point at $880. The point is whether the pandemic and the current US regime’s green plan is just smoke and mirrors and the reality is that Tesla will have to compete hard against the big automakers in the EV markets.  Investors might want to understand the strength of the Tesla brand and Elon Musk’s leadership as Musk touts Bitcoin and then tears it down as a payment method.

When you see Tesla’s stock price against the Dow S&P and NASDAQ price trends, the future become a little clearer. This might be your best pick for the next 3 months. With this current dip in price and future dips, you might find a good point to buy TSLA stock if you believe in it. A resurgence in the US economy (post mid terms) could generate  a big jump in sales.

No one could have forecasted the huge jump in price this year, but a large group of investors, perhaps most Millennials, love this company and want to own part of it. It’s hard to argue the valuation due to Elon Musks’ adventurers in Spacex, solar shingles and lifetime battery technology. He’s become a superstar for many young entrepreneurs and gets more press than most other big cap companies.

S&P Dow Jones announced that Tesla Stock would be included in the S&P 500 beginning last December. It is the largest company ever added to the S&P.  Bookmark this page and keep up on the latest on Tesla stock. and other EV stocks.  And check out the 3 month forecast, 6 month predictions and 10 year outlook.

TESLA was mentioned as a replacement for Netflix as one of the FANG stocks, but that might have to wait until after the Covid 19 pandemic has subsided. See more on the forecast or outlook for Google stock, Facebook stock, Apple stock and Amazon stock.

Sales growth of electric vehicles in the US has been steep. After a hot 2018, growth has slowed, with a forecast of 405,000 units. So when Tesla delivers 175,000 in one quarter this year, that is an astonishing stat for one company. After all, electric cars are a new product. And if gasoline drops in price as it has, it stands to reason the big car makers are going to sell more of their gas guzzlers.

Plug in EVs comprise a very small portion of the total market. Regardless of how Tesla performs, they are the premium brand in a market with incredible potential. The upside is something to pay attention to, since the other automakers are more committed to gas powered cars and trucks. 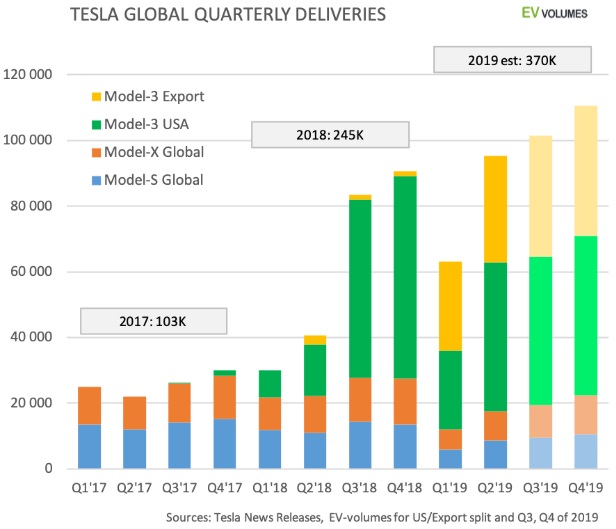 During Q1 2021, Tesla recorded a net income of $438 million on earnings of 93 cents per share on $10.39 billion in revenue.  The total investment in Bitcoin by Tesla rose to almost $1.2B. Cash and cash equivalents decreased in value to $17.1B in Q1, driven mainly by a net cash outflow of $1.2B in cryptocurrency (Bitcoin) purchases, net debt and finance lease repayments of $1.2B, partially offset by free cash flow of $293M.

What are the threats to Tesla success? Very low priced gasoline will keep constant cost pressure on Tesla. And hydrogen cars are not far off either. Hydrogen is a powerful type of fuel. Musk’s original thought that we’re going to run out of oil and fossil fuels is simply not true. In fact, The US has become the world’s largest producer of oil. If the US were to build more fuel refineries, gasoline prices would plummet making gasoline powered cars very cost efficient.

Tesla EV cars are priced above mid-priced autos and might be harder to sell in a recession. However, Tesla is an unmistakable brand of the future.  All the cars are built in Tesla’s California factory which will draw the ire of some states who stand to lose auto jobs. Production in China is growing and is expected to make up 40% of sales soon.

Other companies are building EVs such as Nissan, GM and BMW and have production capacity and market reach. It has massive debt which might be hard to finance if interest rates climb.

Tesla positives: It’s a determined, resilient company with a new gigafactory that might produce 500,000 cars per year. The company also produces new age products including solar panels, Solar Roof, the Powerwall home battery, and the Powerpack battery system for commercial and utility-scale sites. Read more about their energy solutions. Read more about the best electric vehicles.

See more on the best stock picks for 2020, and an updated stock market forecast. Some still believe the market is in a bubble and a stock market correction is inevitable. Political instability is what makes that possible. Otherwise the US economy is looking good investors. The S&P outlook, NASDAQ forecast and DJIA predictions are positive.