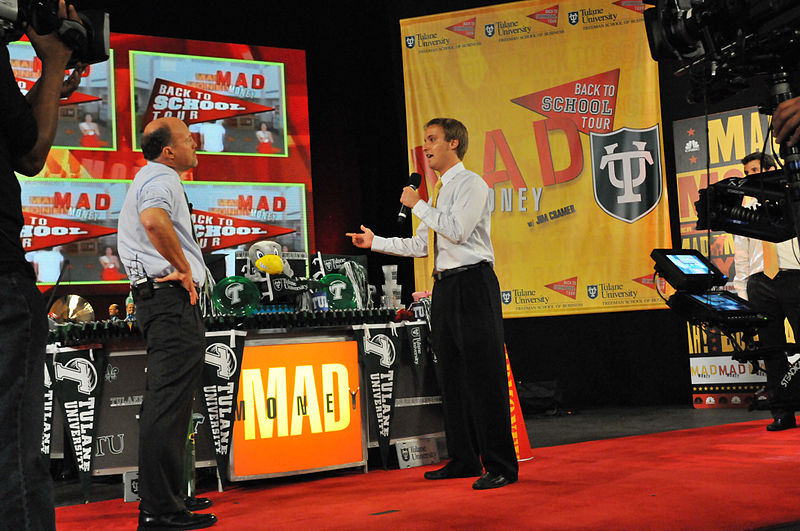 You’re likely interested in what he’s saying about the stock market, which are the best stocks to buy, and the forecast for 2020 and beyond. He has some ideas. He says recently you should trim your holdings because the market is a little too optimistic. He doesn’t seem to believe the China/US trade deal holds water. He said some are making ill-advised statements.

Cramer believes the Chinese communists are beginning to change policy. However China officials do not agree with his interpretation of events there (drug crackdowns). Today, Jim talked 5G and how it will push up demand for microchips. He warns of a glut of equity supply that will find no investors.

The popular TV host is a former hedge fund manager who has an estimated net worth of $100 million. That is a substantial fortune for a guy who doesn’t have formal training or a degree in finance. That’s right, he has no investment training, and he’s considered one of the brightest minds in the world of stock market investing. And he has the biggest following with his Cramer nation.

Maybe it’s not so hard to believe because today’s fast changing, emotionally charged financial markets demand intelligence more than training.  Those who learn outperform anyone from a school.

If you’re planning on investing in stocks and need to know the Dow Jones outlook, NASDAQ outlook, or S&P outlook, you’d be wise to watch his TV show, Mad Money regularly.

Get his opinion on Amazon, Facebook, Google Alphabet stock prices and for his stock market forecast. He’s the one who coined the term FAANG stocks.  He makes investing interesting.

With his CNBC show, Cramer is the only TV celebrity who has managed to make stock market investing interesting, and very profitable for average investors. Check out our Best Stock Picks for 2020 .

The discipline at school paid off, and so did his zeal for investing. No one loves the stock market more than him. He is said to have left stock investing tips on his phone answering machine when he was starting out.  This entrepreneurial spirit and gall lead to one investor giving $500,000 to manage which he successfully grew.

In 1987, he landed a position with Goldman Sachs in New York, but left later to launch his own hedge fund, a big success which he retired from.

Cramer purportedly had only only one bad year in investing and he is said to have avoided the Black Monday. In 1996, he co-founded thestreet.com an investment magazine which he sold for about $16 million. Just before the financial collapse and stock market crash of 2008, on NBC’s Today Show, he advised investors to take their money out of the stock market.

In 2002 to 2005, he appeared on an investment show on CNBC called Kudlow and Cramer. Larrry Kudlow of course, is Donald Trump’s director of the United States National Economic Council.

Mad Money with Jim Cramer appeared in 2005 and is one of the most successful shows today. Due to his contract with CNBC, he is forbidden from making stock transactions.

Forget the Noise and Hype, and Here What He’s Saying

One thing that comes to mind when listening to Cramer, is that despite the rant style talk, he has a balanced view of the markets. He appears to have a bit of contempt with macro economists and their theories. He indicated his good stock picking ability was aided by good markets, so he can spot winners in rising markets, more than survivors in a bad market.

If you’re a fan of the Mad Money show, you know Jim’s an entertainer and an educator. He’s written a number of stock investing books, but I’m not sure how relevant they are as we head into the 2020 election year.

I’m sure Jim knows a lot about the impact of emotion in investing. And with his stock market experience available freely and visibly online and on TV, he’s one expert/guru you might want to hear every day.

You can watch full episodes of Mad Money on CNBC online.