Facebook announced its 3rd quarter earnings results and posted a drop of 4% YoY to $27.7 billion. They reported a net income of 22 billion which is only half of what it earned in Q3 of 2021.

It was only the 2nd quarterly decline in the company’s history.  Investors didn’t like what they heard. META stock price fell to its lowest level since 2016 today, down 22% today alone.

Mark Zuckerberg, Meta’s founder and CEO, deflected investor concerns with his statement: “We’re approaching 2023 with a focus on prioritization and efficiency that will help us navigate the current environment and emerge an even stronger company.”

A story from the New York Times in August dug in about what’s wrong with Facebook. As they looked at the company, they realized it is in trouble. Keywords in the article include trouble, reduced spending, struggling, desperate, aging audiences, inability to innovate, no wins for META yet, antitrust regulators,

The statement says little about moving the focus away from METAverse and getting back to its core business of internet advertising sales. In essence, Facebook, Instagram and What’s App are advertising platforms which earn the funds Zuckerberg is spending on AI and Metaverse.

Competition in the ad space plus a strategic barrier put up by Apple on its iOS mobile operating system is creating unanticipated challenges for its ad revenue in future. Google, Amazon, Microsoft are enjoying big success in the all important Cloud computing sector, while META has avoided the cloud.

A big threat for META is that it has to operate on competitor’s mobile devices and via competitor’s cloud computing environments.  Apple’s restriction might be just the beginning of strategic attacks on Facebook’s business success.

After announcing a disappointing earnings report, investors sold off stock today to add to a 70% decline in META stock value in 2022 alone. Facebook’s epic fail began on Feb 2nd 2022. On that day, investors punished the company for disappointing Q4, 2021 earnings (its stock fell 26%).  Meta’s Reality Labs division (makes Virtual Reality headsets for its Metaverse product) has lost over $9 billion in the first three quarters. 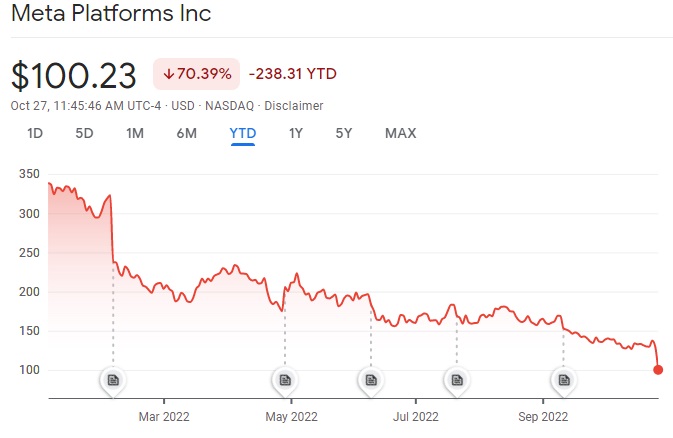 Expert forecasters, analysts and investors are starting to revise their long term view of the company still headed by founder Mark Zuckerberg.

Zuckerberg has taken the company’s business model and revenue source to the virtual reality dimension, perhaps revealing where his head is at personally. The Metaverse is looking weaker than ever as the world prepares for an engineered recession. Demand for AI solutions has likely dropped this year as well.

Longforecast suggests this may be a short term blip, as Facebook’s fortunes turnaround in mid 2023.

Other ad platforms including Google (Alphabet) and Amazon are suffering lower ad revenues this year as well.

It begs the question of whether Facebook is taking its monopoly of social media and advertising platform for granted. Although it enjoys a monopoly with its various social media assets, it still must reach audiences to create value for advertisers.  TikTok has taken young eyeballs away from Instagram and Facebook.

Consumer and business cutbacks along with a strong US dollar are adding to Facebook’s total revenue downfalls.

Investors are left asking whether META can recover or if the slippery slide can’t be stopped. Barchart’s analysts aren’t pulling any punches. They have a strong SELL recommendation.

The 3rd quarter disappointment was announced simultaneously with a positive 3rd quarter US GDP report which was up much higher than expected. It seems the economy remains awash with stimulus cash and will take more rate hikes to reduce inflation.  That spells bad things for tech companies who need cheap cash to pursue their “metaverse” dreams.

For a lot of bored, stay in place people, Facebook offers a distraction and a way to connect with friends and family. For that reason, Facebook advertising ws pulling in a lot of ad revenue. That unrealistic cash flow gave Zuckerberg a lot of money to dabble in futuristic scenarios that have proven to be too far from reality.

As governments try to revive the US economy and as globalism wanes, government regulators will look more closely at the FAANG monopolies including Facebook.

Facebook monopoly is a definite blessing for its investors, but the GOP is making anti trust anti monopoly noises. They had been investigating Google as well (see Alphabet stock price) but it won’t be long before Facebook is in their crosshairs again.

Facebook Rooms, Facebook Workplace, and Facebook shops were three new ventures the company was venturing forward with.  Facebook Rooms was set to compete head to head with Zoom Video another pandemic stock. Was this a viable venture or was Facebook simply jealous of Zoom’s success and desperate for reality based virtual reality.

The fact META’s name for its virtual reality labs unit is Reality Labs tells you something about the falseness of the whole company.

Does Facebook Rooms fit with Facebook Workplace as a way letting up to 50 people collaborate via video? Facebook Rooms will apparently use AI to create 360-degree panoramic backgrounds as well as support for augmented reality (AR) filters similar to Instagram and Snap’s Snapchat.  Is there a big demand for AI generated backgrounds for video meetings?

Facebook shops is an interesting new service to help small businesses sell online. One analyst sees a potential $40 billion market that puts it up against Shopify.

Facebook announced Libra, a new payment system and Facebook news, two ventures to increase sales revenue and distract more users from their posting. The Libra venture would be wildly profitable if the US government approved it. Instead, Facebook renamed it as Diem, and then eventually sold the unit.

Increasingly, Facebook has positioned itself as the only social media channel. With Twitter and Linkedin struggling to remain relevant, Google+ disappearing, and Pinterest as a cottage pastime site, Facebook is left with a monopoly on social media. Facebook earns 93% (87% last year) of its revenue via mobile media and the might tell you why Google is emphasizing mobile now.

Facebook’s userbase continues to grow, from 300 million in the US now, forecast to reach 324 million in 2026. Add on Canadian users of near 30 million for North American totals.

Worldwide, Facebook has entered the lives of 2.85 Billion people. Did McDonald’s revenue stop when they maxxed out in North America? It actually generates most of its revenue outside of the US, so FB may be following the same path. 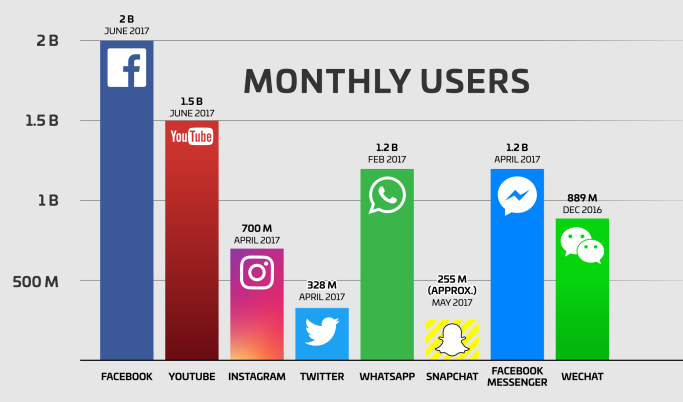 Global Revenue per user – Chart courtesy of StatistaThis rosy report should elevate its stock price and encourage buyers to get in on some good dividends in 2019. Estimates for earnings per share are $2.21.

Finding a downside in the picture is difficult. No real competitors are presenting themselves and their global userbase should grow for many years. If you use Facebook, you know how much less intrusive its advertising is. They’ve got lots more opportunity to grow ad revenue via FB, Messenger or Instagram.

Ad revenue from Instagram is expected to make a big difference in future. Consider that Facebook will have to the two top platforms for young and older users. Monopoly is the goal and they’ve got it.

Facebook bought Whatsapp for $19 billion but it hasn’t earned much money so far. Worse, a number of rival SMS technologies put the success of whatsapp in question. Forbes believes in it, and says its ad revenue will be $5 billion per year by 2020. Userbase is only at 23 million so there’s plenty of potential if it can penetrate the North American business market. 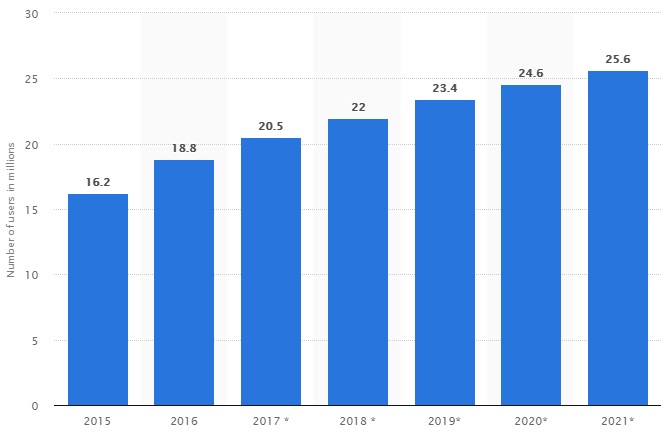 Together with Google, Facebook almost owns Internet advertising. It would be hard for any startup to get established against them.

Facebook’s advantage comes from the user identity and behavioral data they collect. The company has used that data to feed into artificial intelligence systems to predict customer behavior and thus show more relevant advertising to stimulate buying intent. This is an enormous advantage over smaller firms who know little about users online behavior.

A recent estimate by 44 stock analysts predicts a median estimate of a 27.5% increase in Facebook stock value. The range they projected was from a high of 275 down to a low of 149. So the experts are divided about Facebook’s future value. Long forecast has set a Facebook price of $151 in 2021.

Instagram is Facebook’s cash cow, expected to earn $14.4 billion in world-wide sales, which amounts to 4.4% of the global ad market and 6.2% of the global mobile market. There’s lots of room to grow.

There are plenty of high flying stocks that could offer better stock price appreciation, stronger P/E ratios, and higher dividends, yet Facebook is one of those solid stocks you should have in your portfolio. It has almost Blue Chip status.

Check out the state of the stock market and the best stock picks, and be familiar with the DOW forecast, S&P forecast and NASDAQ forecast. Review the predictions for all of the FAANG stocks.  The predictions of some experts and media people are for bond price increases, right now with Fed Chair Powell pushing interest rates up.  The equity markets still have a long way to go. Don’t believe the pessimists.

The US economy in 2022 will soar and that will fuel a rosy 2023 housing market forecast at least for those trying to sell their homes.  Good luck with your stock portfolio this year.