Is the Housing Market Recovering?

The housing market in 2020 took at sharp hit when the Covid 19 disease came ashore in the US.  But this steep drop had to be followed by a sharp uptick at some point and it looks like it’s in full swing now.

So what does a post Corona Virus housing market recovery look like? Can you trust the momentum? Will the Presidential election results or a 2nd Covid 19 wave results in a housing market crash?

Smart buyers and sellers are pondering the recovery that seems to be underway now. 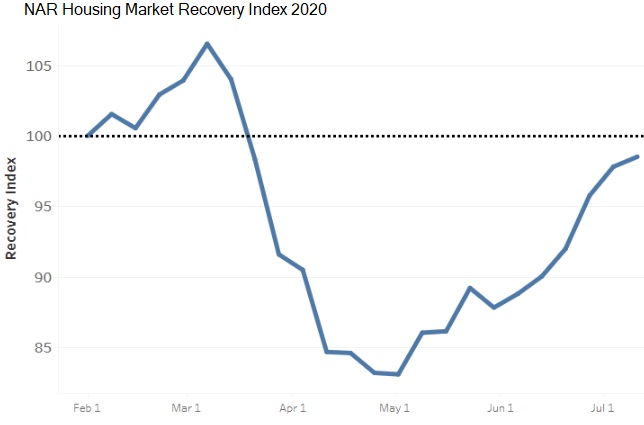 Have Buyers and Sellers Adjusted to the Pandemic?

As business slowly reopens, and Americans learn to control and live with the deadly Corona Virus from China, the housing market is the first thought of many buyers and homeowners this summer. Many want to leave where they currently reside.

And while many homeowners aren’t willing to give up their homes just yet due to the fact there is nowhere for them to move to, and listings are down year over year, the price they might receive this year and next is rising. Each state has its own situation, including California where home prices are floundering. But the signals are clear, home prices are beginning to rise faster.

Mark Fleming, First American Chief Economist joins of Yahoo Finance to discuss the current housing market and the outlook. As he says, lower mortgage rates can result in higher bids on homes for sale.

There are forecasts for falling home prices, foreclosures, and market crashes. They’re driven by fear, misinformation, and the deliberate attempts of young people to spread the Covid infection. Although the fall season with back to school and indoor activities is ahead, the housing is protected by its lack of housing stock. Crashes come with excessive supply, of which there is none.

Another factor is continued stimulus aid to maintain consumer spending. And at some point, the borders will be opened again for immigration, perhaps a flood of immigrants if the Dems dismantle the border patrol.

The Democrat/CNBC’s Wapner are not happy about the strong housing market under Trump, but his guest Ivy Zelman CEO of Zelman and Associates is optimistic.

In the graphic below, we see the number of homes in the US has been flat for decades and it’s the central reason why prices have skyrocketed. It was government action to protect home prices, and unfair International trade which killed demand from American home buyers that’s resulted in this mess. 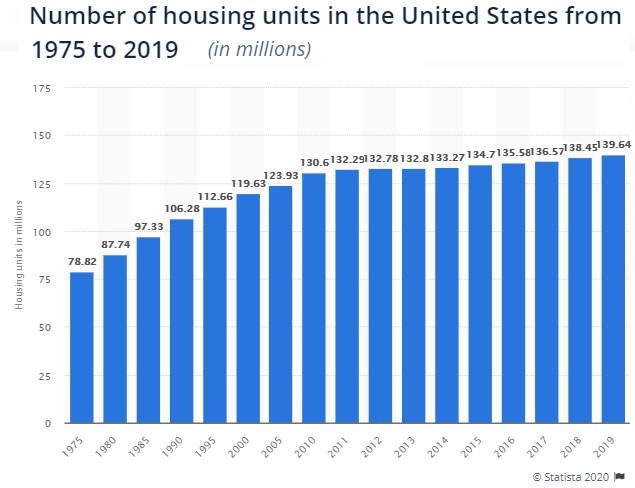 If the economy heated up, with record low mortgage rates, upward price pressure would be even more dramatic. Right now, its only the nations home builders who are creating supply. That’s why (see housing stocks) stock prices for Toll Brothers, Lennar, and many other publicly listed new home builders are doing well right now.

In fact, housing stocks might be one of the best investments going right now. The experts believe they’re undervalued and demand may grow stronger.

When you combine the rising pending home sales numbers, rising prices and the new construction boom, you’d have to say the market is healthier. Supply is missing.  Consumers too have been doing well as savings rates are growing. Mortgage defaults remain low, renters are paying their rent, and mortgage rates are forecast to remain low for years.

And American’s savings rate has risen sharply which typically happens before a housing boom. And money now in the stock markets could shift to housing as the Dow Jones, S&P and NASDAQ hit their peak.

Now, we’re all nervous about the volatility lately and the potential for a housing market crash and perhaps a stock market crash. But when we do our research, the forecasts and predictions have to be for market recoveries.

The big concern is cities such as New York and San Francisco where there is a surge of people leaving. Condo prices are expected to crash. Will they cease selling and just stay put? With new construction growing, they’ll eventually find a place to move to. That means they will sell their homes in the next 12 months.

In my early March housing market forecast and update, I reported that August/September would be the big months for recovering sales. We’ve had some unforeseen setbacks (Riots, deliberate infections by young bar/beach goers) but the lack of evictions and mortgage defaults has to be seen as a positive surprise. The financial support from the Fed and President Trump has been excellent. Perhaps, the September target is the right month as not all businesses have reopened.

The government’s commitment to avoid catastrophe, and President Trump’s ability to stave off the vicious propaganda efforts of the Dems has given investors confidence in the new USA.

Housing markets are traditionally crashed using rising interest rates. The poor homeowners typically lose their homes and become unemployed, and then the cycle begins anew. But one economic expert just last week said the traditional economic cycle is dead. That’s because it can be diffused through monetary and fiscal actions.

It could have been in past decades too, but politicians and billionaires didn’t want it to continue, so they acted to crash the markets.

With no government actors to crash the housing market, buyers feel a lot more comfortable and builders feel good about building.

Of course construction labor, developable land, and a coming Presidential election could bring everyone back to the sober reality that some politicians don’t like President Trump’s bull run. The current Pres has already stated his belief in raising taxes, and that kind of talk, not asked for by the people, usually foretells a recession. Lowering tariffs, reinstating regulation, bringing jobs back from China, and deleting immigration measures completely will make lot of American workers nervous.

The market is behaving like it this is a return to to the boom days of February 2020, where demand meets rising supply amid low interest rates and rising American employment. Problem is, this wonderful image could be wiped out completely with a Dems election win.

When the Dem Regime left office in 2016, small business formation was the lowest in US history, as Obama favored Chinese business and trade deficits with them.

Fortunately, the Covid pandemic which President Trump has not handled well could be over with the introduction of a successful Covid 19 vaccination. That is a key expectation that drives much market optimism.

Yet, even with no vaccine, buyers are moving the market by buying new homes in rural areas. They’re creating new home construction production, and creating economic expansion on their own, to avoid Covid 19 and rising urban crime.

Investing in US infrastructure is a huge vote for the future of the United States, and hopefully that will be pushed through. Should President Trump protect American jobs, raise earnings, keep mortgage rates low, promote opportunity zone development further, and maintain stimulus spending till the fall for those who need it, the US economy will be fine.

Lets all spread the word aggressively about wearing masks and keeping common places super clean and we can ensure the housing market recovers to its early 2020 glory.