It’s a challenge to describe the Chinese economy given it is a capitalist market built on top of a communist system. The country is now at a cross roads and must decide whether it can handle a free, open relationship with the rest of the world.

Today’s topic is China’s effect on the US stock market forecast and US economic outlook. Uncertainty reigns of late due to the country’s stuttering performance. No one is sure if it’s a cold or they’ve caught a strange virus (that didn’t start in their country).

The most recent reports aren’t too comforting for those investing in Chinese stocks.

The WSJ reports China’s retail sales rose just 2.5% in August Year over year, and that’s down sharply from July’s number of 8.5%.. That’s the lowest pace of growth in a year and it miss experts forecasts by 6.3%. How do economists keep their jobs!

China’s housing market has been a big driver of growth, but it’s in trouble.  Home sales dollar volume fell 19.7% in August from a year ago, the largest drop since April 2020.  Average new-home prices in 70 major Chinese cities had their smallest gain this year.

We’re used to seeing eyepopping numbers out of China, with growth almost always in the double digits. But it just doesn’t look like we’ll see those numbers again.  So let’s discuss why the sun might be setting on China.

In an ideal world, the US could benefit from a strong Chinese economy. Yet greed and lack of confidence always combine to wreck the possibilities of good business and trade. China has become too greedy in its relations, overly impressed with its labor intense production, the need of its human masses, and a sudden rise in auspicious wealth.

And when China boasts of its manufacturing, construction, AI technology and more, it is rubbing salt in the wounds of the US, Canada and European investors who have had intellectual property stolen by or transferred to Chinese companies, who copied and competed against them unfairly.

Can China Keep Taking Advantage of the World’s Good Will?

Many Americans hate China with its greedy protectionism and refusal to play fair economically. The currency manipulation and developing country status awarded by the WTO have many complaining loudly (Trump). US politicians and economists warn about China’s planned One Belt One Road initiative which would make them the number one world power. Given China is dictated by a small number of communists, that is not a welcome scenario.

China has built extensive distribution networks via land and sea, and its monopolistic success in manufacturing is also its bane as other nations may now be preparing to shut the country out in the cold. It has benefited from taking other nations technology and systematically beating foreign company’s competitiveness. All the while, China doesn’t allow, or regulates, or interferes with foreign company’s presence in their burgeoning billion consumer marketplace.

China is undergoing a transition of late amidst a recent drop in manufacturing output, so there’s considerable uncertainty about how this will play out. President XI said he is certain of invading and taking over Taiwan, which will end the global economic party.

A cold war or real war between the US/Europe and China would result in a global recession.  Supply chains would be severely disrupted globally and global stocks would plummet. It would take time for economies to ramp up their own production or source other countries.

Right now, in Arizona, US microchip producers are running hot. There is a concern that future microchip supply will come from Arizona and not China. The US is slowly readying for the conflict, and US manufacturing is on the rise.

To pour more cold water on their overheated China economy, the communist regime has announced extensive new regulations that threaten many of their companies, particularly those listing their stocks in other countries. Many of the worst performing stocks today on the US markets are Chinese stocks. The outlook is very troubled.

The overleveraged and indebted Evergrande Real Estate company is now being divested after not being able to meet its payments due. More Chinese companies might experience this same fate. Some feel this unwise drastic move could cause the China system to topple like dominoes with devastating ripples crossing all oceans to wreck other economies.

XI Not Ready for China Recession

After almost two years of Corona Virus recession and fear, these events are not welcomed by the world community. Yet the greedy mind doesn’t hear well. The Chinese leaders may not have the intellectual facility to manage the situation, and instead try to retreat behind the wall, become stubborn and uncooperative, and renege on agreements (they haven’t met their agreement for US imports).

Just yesterday, Katherine Tai, U.S. trade representative, said China was ignoring U.S. objections to its use of state power to dominate global markets at the expense of American workers.

After being responsible for the deadly Corona Virus launched in Wuhan Province, and seeing its exports market crash, the Chinese GDP jumped to record levels in the summer of 2021.

It enjoyed 18.3% GDP growth in Q1 and another 7.9% in Q2, 2021. The country didn’t suffer the devastating consequences that plagued most other nations.  Goldman Sachs has cut its forecasts for China’s economic growth for this year and they expect China’s economy will only grow 7.8% in 2021 compared with a year ago, which is down from its earlier forecast of 8.2% growth. 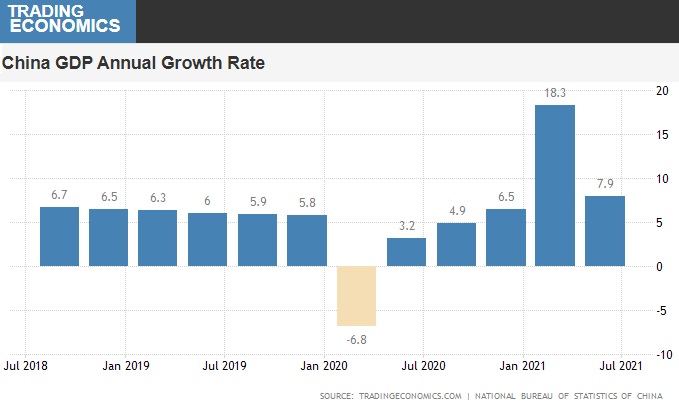 The biggest threat to the continuing health and prosperity of the Chinese Economy is in a suggested decoupling of their economy with the US. The US trade rep said yesterday however, that the US is pursuing another track of promoting US competitiveness in China instead. Even after failing to meet agreements, she believes China is still trustworthy enough for yet another failed deal.  5 to 10 years from now, it will be a footnote in a tragic part of US history.

Although the Dems have tried to cozy up to China, the looming debt ceiling, Hong Kong takeover, and China’s threatened war against Taiwan is pushing the two countries to break economic ties.

China would benefit tremendously from a $3.5 Trillion spending bill in the USA. And the loss of the US market could crash their economy. China’s troubles with Australia with trade embargoes on Australian energy leaves the country vulnerable to oil and natural gas price rises. And the regime announced the banning of Cryptocurrency which is not a surprise given it would make currency manipulation and their dual hypocrisy currency Yuan and RMB. Inevitably, Bitcoin will arrive in their economy.

As we discuss here in this post, the worsening China US Trade war is bringing more serious threats of retaliation from China.  China has also failed to live up to the US trade deal signed with President Trump.  China’s purchases of U.S. exports through August are estimated to be 62% of what was agreed upon.

However, without the US consumer markets, China will find itself with meager GDP and sales numbers. The EU looks like it’s in a bad mood too and most EU nations don’t have money to spend.

The US stock market rise was severely criticized for that performance yet at the same time, China’s stock markets have seen robust price growth yet were not mentioned negatively by the media.

Fitch raised its global GDP growth forecasts for 2022 to 4.0% from 3.6%.  This is due to anticipated to lower social distancing blocks on retail and business as the vaccinations are conducted.

The EU too won’t be sympathetic to China as it faces its worst economist outlook in almost 100 years. The rest of the world won’t look kindly on their economic plight while China is concerned only about its own internal political challenges.

See more on the US stock market forecast, housing market predictions, and the US economic turnaround.