Is the US Headed for a Recession?

Recession Watch 2023:  Is the possibility of a recession next year just negative thinking or is it clear thinking? Many don’t want to consider the unthinkable, yet we know what the signals are and how we’ll respond.

Increasingly, the prediction of a recession is reaching full consensus with a few outliers (IMF) thinking the signals are transitory (like Biden, Powell and Yellen said inflation was transitory). A few stock market forecasters (Tom Lee) still believe we’ll see a strong second half of 2022.

And the slide has happened so quickly, that some are suggesting later this year we’ll see strong recessionary events. In fact, GDP has fallen two straight quarters which is actually a recession. Plummeting home sales and stubbornly high gasoline prices are significant signs of a downturn. And there are many more.

See the 13 key signals of this recession below and consider that they’re all strengthening.  We don’t have to have a recession. It’s the government’s decision to stoke the fires with more gasoline (interest rate hikes) on a credit driven economy, and stifle US energy supply. Oil prices play a big role in a recessionary picture, yet other signals too are flashing.

Stimulus Cash Turned Out to be Excessive

Responding to the Covid pandemic, 2 US Presidents launched an unprecedented stimulus payout to counter the shutdown. And the current President used the stimulus effort to pump money into politically advantageous causes and recipients. That money, estimated from $5 Trillion and more created a spending wave that is now splashing back on the US economy to create high inflation.

Now, over 2 years later, for many reasons, the recession threat has re-emerged along with a potential stock market crash and housing market crash.  In response, the current government believes the old school, rising interest rate solution is the route to deal with it. No other options are being considered.

The IMF counters the prevailing winds with its forecast that the US will narrowly avoid a recession. In it’s predictions, no mention of energy prices, Russian war, and European blockades of Russian oil.

13 Signs the US Economy is Losing Momentum

Are we headed for a recession? When 11 key signals flash red, it is alarming.

Rising interest rates cause downturns, given that business and consumers live on credit.  And as this chart shows, interest rates correlate with high energy costs. The Biden admin waged war on US energy production and confirmed they will not stop.  Yet oil and energy are essential components of the economy. If US oil production is cut off and damaged for years, it should forewarn of economic misery. It does look like the US is being driven in this direction. 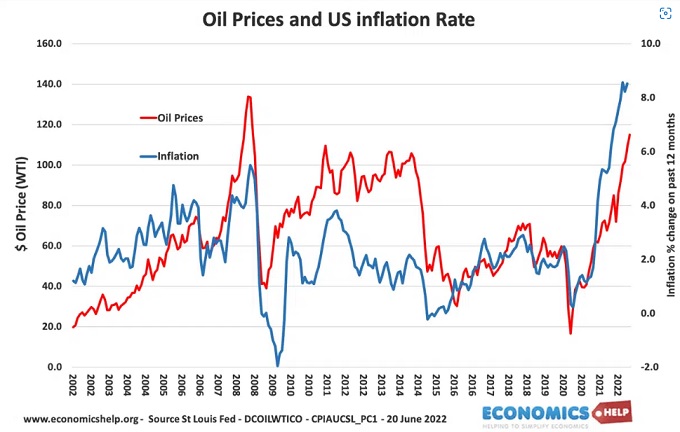 Economists predicted the economic downturn in the US would begin in 2017, Trumps first year in office. Well, he lowered taxes so that didn’t happen. Now it’s 2022 and the issues are coming to a head. That’s because the Democrats can’t print money to cover up shortfalls.  And Biden has been instrumental in angering Russia by accusations of US election manipulation, and shutting down their expensive Nordstream pipeline.

Biden decided he knew better that Russia was a military threat, even while China has proven far more dangerous. Now Europe can’t get natural gas to heat their homes, and grain is not flowing from the Ukraine.

I had predicted that political meddling was a clear cause of problems, stemming from mismanagement by the Washington bureaucrats. That has come to fruition as Biden more than ever flies the world to get compliance with his agenda. Those who follow it (Europe and US) meet with disaster.

While recent tactics to let Russian oil flow secretly and with US oil reserve releases and political begging (Saudi Arabia) have lowered price momentarily, the problem is building and could create a tsunami that will hit US shores by 2023. These issues can only be fought off so long.

This is what Zillow believed back in 2017, and how they’re happening now in 2022: Geopolitical events (Putin, cancelled Nordstream), Monetary Policy (Powell, Yellen, Biden) and stock market failure (deglobalization, regulation, and inflation), along with political gridlock (post mid term results). Nothing has changed, except we’re at the end of the rope. 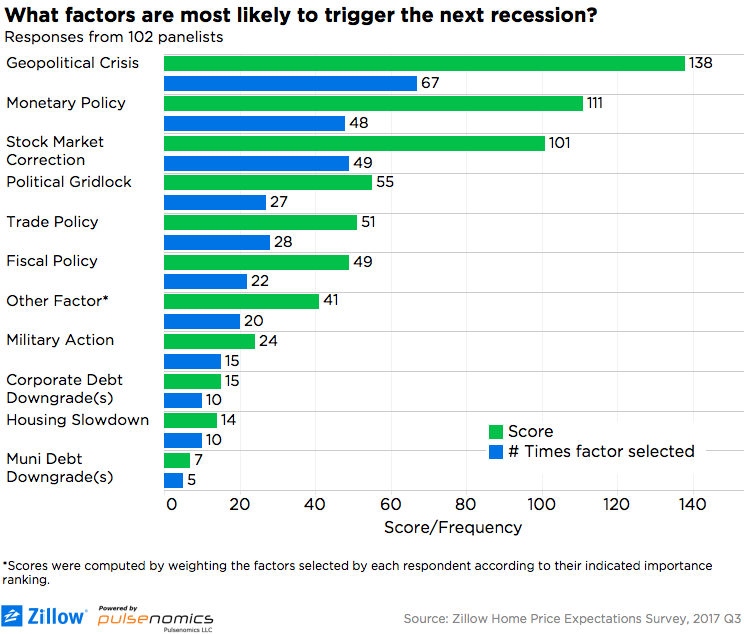 The economic stimulus eventually drove the stock market to record heights, and pushed home prices to new records, while making unaffordability the most pressing problem for Americans.  The wealth polarization the Democrats campaigned in for the 2020 elections was made much worse, and out of control open borders caused the housing vacancy rate to sink to record low levels. Even renters who voted Democrat found themselves homeless as a reward. 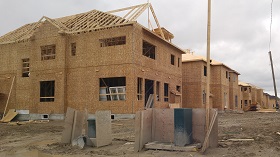 Homebuyers are especially wary. Demand for homes and interest in home loans has really dropped. People aren’t even bothering to check their credit scores lately nor search for homes for sale. It’s pointless as we enter the downturn.

Those who bought homes in the last 3 years are extremely vulnerable and millions of Americans face living in the streets in 2023.

The most serious threat is the Fed. They’ve historically pushed the economy into recession with huge, unwise interest rate leaps. That’s like pouring mud into your gas tank.  And the Fed chair always justifies it one way or another, as “keep consistent with historic cycles and keep inflation under 2%.”

There are a lot of people who believe that economic cycles are natural not engineered, and that this bull economy must die. 2020 is the year they believed it was to happen, but now it’s pushed forward 3 years to 2023.

Consumer Sentiment Goes up and Down with the Tide

If a recession is near, it means the bitter end of the American dream for millions. And if Tariffs are removed and free trade is reintroduced, jobs will float back to the cheap labor countries. When the President makes a deal with the Chinese, it is a deal with the devil?

The wild card is the mid term elections, and whether the Republicans will have enough power to get the economy rolling again.