Will House and Condo Prices Fall?

Hopeful home buyers are always asking, when will home prices drop throughout 2022 and into next year? Will we see house prices fall as frenzied buyers give up on their quest to find a house for sale?

According to Redfin’s July 5th report, prices have dropped 2% in the last month, and builder permits and applications are actually plummeting. The frenzied mood of “got to buy a house” may be finally disappearing after a super long 12 year increase.

There were calls for dropping home prices but they never came true until now. The fact is the shortage against demand combined with record low mortgage rates guaranteed available stocks would be strongly bidded on.  Some buyers were desperate despite ridiculously high prices.

Recent buyers are likely to have severe buyers remorse.  Big mortgages are scary as we head into a recession. Americans are going through their savings at a rapid clip and by October, they will have a completely different view of real estate and their immediate future. The California housing market and economy are the most scary.  The 5 year long term forecast is still good.

The market has changed and economists believe we’re headed for a recession. A recession doesn’t have to happen. Inflation could be flattened by opening up supply of everything, flooding the markets and lowering prices. But that isn’t politically attractive for the Democrats who staring at a certain defeat in the coming mid term elections.

With them holding firm and trying to manipulate markets, we’re seeing vicious volaility which will worsen in the coming 3 to 6 months.

Homeowners on the other hand are still enjoying the fantastic prices buyers are paying (up 14% year over year).  Redfin reports prices are falling across the US, faster in some states.  They’re wondering too whether prices could suddenly fall, as often housing bubbles do suddenly burst.  We know it’s a correction, but what could take the bottom for a free fall?

You might be asking the question: “should I sell my house now?” The answer to that is yes.  If the market drops 10% this year and 10% more next year, we’re talking $50,000 to $200,000 for some homeowners.  On a 1.6 million dollar home, your loss could be $300k if you don’t sell.   Get into the selling mindset, call a Realtor, discuss it, and consider unloading your property because this was a once in a lifetime real estate profit opportunity.

The 2024 Presidential election is a long way off, and no one will save the housing market.  There are homeless, wicked rent prices, and more and the government believes this recession will resolve those economic problems. So they see higher interest rates differently than you or I.

Next year, home prices could be down by 20% as the recession really sinks in. Economists suggest no recession in 2022, but instead point to 2023 as the year of reckoning.

Why Would You Not Sell when Prices are Already Plummeting?

That is the love of the status quo, disbelief in the obvious, and the fact that your home is a long term investment to live your life, not an equity to be traded.  That’s all fine, however your chance to cash in on this once in a lifetime opportunity is coming to an end.

All of these will subside. A mid term election win by the Republicans could see the end of most of these factors.

The problems of the US housing market are of supply.  People don’t want to sell because:

Home construction picked up strongly in the spring as weather improves and as workers return from Covid 19 shutdowns.  However, new stats from Census.org show permits and starts are plummeting. Builders are withdrawing from the market due to higher labor, land and materials costs, along with recessionary expectations.

Today’s builders are smarter and availing themselves of better business predictive modeling and trending stats. The recessionary stats and volatility all point to a cessation of bidding wars and demand. The FOMO obsession with buying is going out of vogue.

Buyers will be more confident of their ability to pay their mortgages. Buyers are looking everywhere for a house which has pushed ex-urb home prices skyward.

Sadly, for homebuyers, the year over year price gains are painful to see. Yet, upper level income earners are a lot more optimistic about their own possibilities to buy a home. It might be short lived however, since high end home prices are the fast growing. 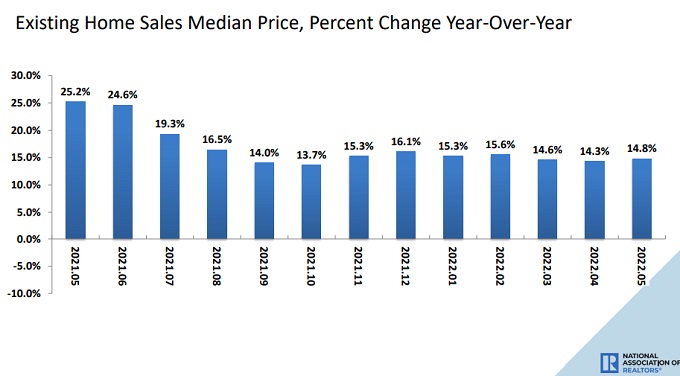 The work from home revolution is feeding demand outside of major cities and this trend will wane a little but still be a major trend. It will broaden demand across all states, particularly the heartland states.  Texas will thrive with growing tech company arrivals and a rising price of oil.

Prices are predicated by supply vs demand, and supply is still constrained, with worker shortage and material cost rises adding to supply woes in 2021.

But we’re not out of the pandemic just yet. Only a third of Americans have had their vaccination shots.  Up in Canada, a very small portion of Canadians have received theirs and they’re suffering a vicious rise in Covid variant infections. Many US states are seeing a growth in variants too. However as vaccinations improve, we could see an improvement in conditions over the summer months. It will be a drain on the recovery and home sales.

There’s little doubt many hopeful buyers hope there is going to be a housing market crash. Some believe the stock market also may go into a high speed wobble as inflation heats up and prices go ballistic.  Home prices won’t fall anytime soon. There are too many buyers awash with cash who know real estate is a good hedge against inflation and mortgage rates are super low.  The Fed has no intention of raising rates.

With cryptocurrency making gains in the financial community, it makes holding cash a shaky proposition.  Cash is not much of hedge against investment losses.

And property investors, small and corporate are buying up real estate for the income potential, particularly single detached houses.

Why will home prices fall?  See factors below.

There is optimism in the industry (perhaps only me now) but it’s not based on current numbers, more on the the 5 year market forecast. The economy will regain its footing this summer.

Could This Fall Become A Housing Market Crash?

Home prices recorded an annual increase of 10% last month according to Corelogic, and NAR has higher numbers. This is the highest since 2006, and we know what happened in 2007.  The crash was a shock to individual homeowners and to investors who lost billions in that recession.

Some are concerned less about home prices receding, and more on the possibility of a housing market crash. If it is the housing crash many are praying for, then they’ll likely pick up a home for much less, if their investments hold up and they keep their jobs.

Are house prices falling up in Toronto, Montreal, Calgary and Vancouver? Corona Virus and falling energy prices are decimating Canada right now. Home prices are falling and will likely follow the same path as US cities.

California and Other Tech Sectors

The tech sector seems to be more resilient so that market is likely safe despite its ridiculously high prices. At watch for falling home and condo prices too is New York City. The shutdown there may be prolonged due to the severe Covid 19 outbreak and overwhelm of its its medical system.

A lot of wealth has been removed because little work has been done. Some estimates are that the US GDP will drop by 25% this quarter. Will the stimulus money be enough to keep the economy moving for several months? Likely not, so it’s important that companies begin work again as soon as possible.

The President’s 2 Trillion dollar stimulus bills has passed and the stock markets responded well this week. The US has the highest number of confirmed Corona Virus cases. Now the spring break beach scenes are starting to haunt a lot of people.

The state of Florida showed up red on the health warning website healthweather.us. The readings have dropped recently, however New York is rated in the normal range despite the fact NYC is in a Covid 19 outbreak.

How Far Will Home Prices Drop?

The data isn’t in, but many Realtors are reporting an almost 100% drop in in-person showings. The Dallas Morning News reported a 60% drop in Realtor showings. Who would show their home during a pandemic outbreak?

Many have reverted to video and other online real estate presentation sites. Others have just given up until the Corona Virus shutdown ends.

But will buyers be in the market after a period of unemployment and concerns about their financial situation for the rest of 2020. And Millennial buyers may stay put in their apartment rentals because the status quo is safer. They may even be on the hunt for cheaper apartment prices. Will apartment rent prices go down? The rent market is much more resistant to falling rent prices, but landlords are likely to see falling occupancy rates.

Why Could Housing Prices go Down?

Prices May not Fall Until 2023

2023 is the year that that factors build together into a huge crescendo. Which are the Housing market most likely to crash?.  Will the Housing Market Crash? and Will the Stock Markets Crash?