Housing Bubbles in US Cities

It’s an unnerving time for homeowners who have put a lot of money and time into their homes and who might worry that they could lose them in foreclosure.  If stimulus aid checks don’t reach homeowners in time, we could see some foreclosures and bankruptcies.

We’re not out of the Covid 19 Shutdown period yet, and the estimates of GDP loss is $2 Trillion, the same amount as the government’s stimulus bill. However, the forecast for the housing market is continued rising prices, fewer listings, and construction growth in rural areas.

The threat of foreclosure however is very real, particularly in a selection of cities that are already vulnerable and are pushed into the danger zone by the economic slowdown. Some cities such as Chicago, Peoria and Aurora never did revive during the last economic boom.

The Perfect Economic Storm: High Mortgage Debt and No Revenue

For some select cities, it’s a perfect storm of factors. Add on the drop in oil prices, crashing stock markets, falling gold prices, and some cities in Montana, Colorado, Texas, Oklahoma, South Dakota are on extreme alert.

The US economic outlook couldn’t have been better in recent years, with record stock market runs and increasing wages, employment and home buying.  The housing market did alright in 2019 despite the effects of a US economy in transition.  US homeowners gained $1 Trillion in home equity in the last year alone. That’s $16,000 or 13.3% more per mortgage holder.

Turns out, real estate has been an excellent investment choice.  Sure there are always skeptics wondering if bubbles will be burst, and out of nowhere crash factors have appeared.

Dark threats already existed in many bubbling US housing markets, (i.e, California, Dallas TX). If the US housing market did slide, which cities might be in a crash scenario. While California might seem at risk, it’s actually other cities without recession proof economies that might concern buyers.  New York city isn’t mentioned in cities most likely to crash, because it’s in the “too big to fail” category along with some big corporations such as Boeing and others.

How the Corona virus will affect real estate?

6 Characteristics of Cities Ready to Crash

Which Cities Are Most Likely to Collapse?

Two Cities rise to the top of the most likely scale: New York City, New Jersey, and Dallas.  New York’s shutdown induced unemployment levels will continue for at least another month and only slowly come back to life. The cost of living in NYC is ridiculous due to a lack of housing. Mortgages and rent prices are sky high, yet if workers aren’t earning paychecks, how long will the stimulus money last? 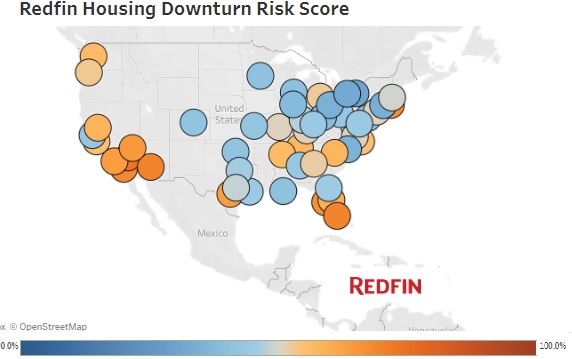 Redfin conducted calculations on US housing markets most likely to crash.  They were a little granular and less specific about the effects of recents events. But this is great insight into those markets who were at risk already.  Keep in mind that most real estate debt is low and foreclosures have been low. 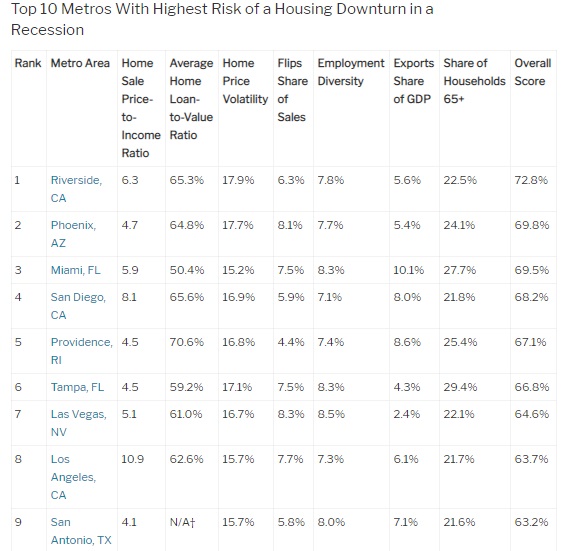 Cities with Highest Risk in a Downturn. Screenshot courtesy of Redfin

Gobankingrates compiles a list of 50 cities most likely to crash.  They include some general factors that highlight mortgage holder vulnerability.  Of course, through a crisis, it depends on the Federal, State governments and the banks as to whether mortgagees are at risk.

GOBankingRates choose its top 50 housing markets, maong the 500 largest U.S. cities . They used these statistical criteria along with Zillow and RealtyTrac data:

Dallas didn’t have a Covid 19 outbreak, likely because of its climate.  Now with temperatures and humidity rising, workers can get back to work, yet with the oil industry collapsing and no demand for products, their slowdown will begin to escalate. A $5 oil price will put a lot of oil companies in danger of bankruptcy.  An extended low price period will ensure they don’t recover.

Take a good look at the Dallas TX Housing market and you’ll see remarkable similarities to many others around the country. In Texas, the loss of oil revenue however will be devastating. There’s not much news yet because they’re expecting prices to jump back up. There’s no demand for energy products, beef, or tourism right now, and a lack of income will keep prices low.  San Antonio, Fort Worth, Austin, Houston, and El Paso will all suffer greatly this spring.

An Economy in Deep Flux

Current national economic trends and conflicts (China and Free Trade) have left some local economies weak. They are on the mend due to the Trump tariffs. However, there are many mechanisms the Democrats and the US Senate could use to paralyze the President and create havoc.  That could bring gridlock and unwittingly cause the whole house of cards to collapse instead. The Democrats have less to lose with an economic collapse and may actually get more anti-trump votes out of it.

Which Cities Will Have a Housing Crash First? 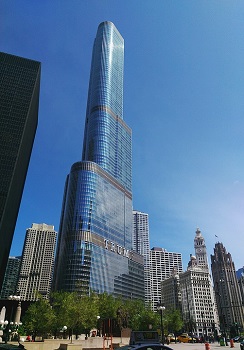 Housing crash history might not help us much. After the last recession, some cities crashed hard, and despite the national recovery of the last 10 years, their home prices haven’t recovered. Some have problems with underwater mortgages, negative equity, and defaults as you can read below.

Now with US trade altered, the distribution of wealth among America’s cities has been changing. However, we have to consider which cities can actually benefit from the return of industry to the US.

Will cities such as Newark, Cleveland, Detroit, Chicago, Kansas, Baltimore, Pittsburgh, Philadelphia, Las Vegas, Jacksonville, and others be apart of the great American revival? Or are they doomed no matter what happens?

Which Cities Will Have their Bubble Burst?

No one is sure which way the national housing market will go, and it’s even more uncertain at the local level. However, it looks as though the new economic and trade situation in the US is the driving factor behind which city housing markets will crash and which may just have a downturn. Old cities will need an extra lift from investment.

With China gone, which cities in the US will take over manufacturing glory and become insanely prosperous? And which will miss the boat again for another business cycle?

The point to be made is that some cities really are more at risk.  The cities of San Francisco and San Jose are cited by most likely to crash due to their Asian/International trade positioning, high housing prices, and how tech startups might vanish. However, in a fast rising Trump economy, Silicon Valley still has a huge US market to serve. And why would world markets end?

Old cities in New Mexico, Wisconsin, Idaho, Kentucky, Illinois, and Michigan are weak and vulnerable to the next recession.

A Powerful Economy Till 2020

Economic experts are predicting the obvious — a great economy till 2020. That’s not far away. Demand for housing is very strong, low mortgage rates continue, and American consumers are becoming wealthier.

So it’s a long shot to call a recession or general housing crash happening. Yet, some experts actually believe we’re at the end of a record business cycle (for corporations) and they predict that a crash is absolutely coming.  We’ll see.

We’d be wise to keep an eye on bubbles in China and Australia’s major cities, and even up in Canada in Vancouver and Toronto. These markets are far more likely to crash. In China, Shanghai and Hong Kong are cities that could collapse if China’s easy exports suddenly ended with Europe and North America. Which US cities benefit most from the Asian markets (San Diego, San Francisco, Seattle) and would perhaps suffer from a China crash?

With or without Free Trade, Canada is in a terrible situation with artificially overpriced real estate damaged by repressive investment and new construction rules. The Toronto housing bubble is well documented and forecasted and a Vancouver housing crash has been expected for sometime now. Without investment and export markets, Canada is perhaps more vulnerable than now teetering China.

If Trump Loses, Will Investment Flood Out of the US?

If the Trump government was defeated in the 2020 elections, could this be the event that sends the US stock markets crashing and the economy taking a nose dive?

The repatriation of jobs to the US hasn’t actually begun but will pick up steam now due to the new import tariffs. President Trump has just announced another round on $200 billion of imports.

Manufacturers haven’t been forced to bring operations back to the US until now.  And the import tariffs will generate massive tax money for the US government.  American companies and their products/services will be in high demand inside the US and will grow in popularity just as Chinese products did for the last 20 years.

We’re only 2 years into the great American revival with Free Trade now in the rear view mirror.  Any attempt to return to the old high debt/high deficit trade situation, would be disastrous. Capital flight is a big risk for cities with big debt and overpriced housing.

Would the Democrats try to turn back the clock if they returned to power? Or would they simply claim Trump’s successes as their own and carry on with what he was doing? The phrase political expedience might give the correct answer.  Yet, it’s this political mess that’s the real danger at the end of 2020.

As laid out in the housing crash post, there’s a number of general and specific reasons why housing markets crash.

City Most Likely to Have a Housing Crash? — Chicago, Illinois

Chicago seems to have been going the wrong way economically for some time. As with many rustbelt cities, there’s not much to protect Chicago regardless of which way the national economy goes. They seem to be the poster child for a double calamity.

High taxes and poor job growth made Chicago the last major market to recover from the previous recession. Prices have only risen 2.7% (national average 6.3%). Illinois has lost more residents than any other state.

During the 2008 to 2018 trade imbalance era, Chicago’s jobs were created mostly downtown and most of Chicago’s population growth has been from Mexicans. All in all, the metro area seems unattractive for high tech business.

If this is the most likely or only housing crash scenario, Miami, Detroit, Philadelphia, Cleveland, Minneapolis, Baltimore, Las Vegas, Denver, Atlanta and Orlando would likely see big declines too. Chicago had more underwater mortgages than any other city — 250,000 homes have mortgages higher than the homes are worth. That’s a whopping 16.6% of homeowners in metro Chicago. And 20% of them owe twice as much as their homes are worth!

Cities at Risk from previous year. Infographic courtesy of GoBankingRates.com

What is the Outlook for Realtors in 2020?

The ups and downs of the stock market are not the same forces that drive the housing market. People don’t need stocks but they always require housing.  The question for Realtors has to do with optimism about real estate and their own self-image as a high performer.

Agents who invest strategically in themselves and their market visibility will become market leaders. My services help to create awesome visibility, which I’ve done for so many big and small companies. The only limitations that exist are those that you put on yourself. Contact me to get your business to the next level.