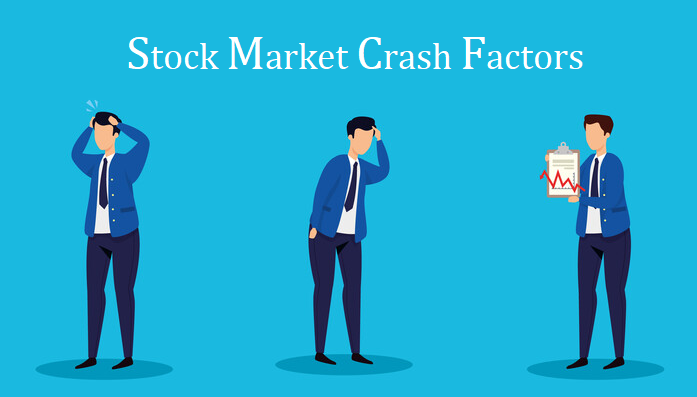 If you’re smart investor and you’re really concerned about the value of your investment (your hard earnings), then you must be aware of what could ruin that investment.

You might have uneasy feeling that this constant inflating of the stock market could end in a crash. More people are asking, “will there be a stock market crash?” And to answer their questions, they will have to summarize the crash criteria and evaluate how the factors could combine for a stock market plummet.

Which indicators can you observe to stay on top of this threat? And if at some point, the signals become really strong, pointing to an inevitable series of corrections and a big crash, should you hedge your way against a huge loss? With this outlook in mind, you can work with your financial advisor to build a better investing strategy.

And that loss could include your home and savings. What if your bank account became totally worthless? If you think the rent crisis was bad in 2020, you don’t want to be a renter during the next big crash. This crash, if it happens, could conceivably affect private and pension funds, accompanied by a severe US dollar devaluation.

There are a lot of us who have gotten their fill of stock market crashes in their lifetime. Almost no one remains who lived through the roaring twenties crash of 1929. But we remember most of the recent crash events.

The 1929 crash heralded as the mother of all stock market crashes because it was followed by the Great Depression. the 1987, 1999, 2007, and 2010 crashes were relatively minor compared to the 1929 event. Most of these crashes were followed by recoveries, and only a certain number of businesses and citizens became casualties. Let’s recount what happened.

The Great Depression (1929): During Black Monday and Black Tuesday, DJIA plummeted 25%. The cause was said to be over agricultural failure, stocks that were highly overvalued, over-leveraged investors who couldn’t pay their margin calls, and a run on the banks who couldn’t pay out funds to account holders who when they lost their jobs resulted in massive retail failure and lastly the government raised the interest rate from 5% to 6%. Within two months of the interest rate increase, the markets began to cascade uncontrollably downward.

The Stock Market Crash of 1987: The Dow Jones lost 1/5th of its on Black Monday. The cause was speculated to be government trade agreements (the U.S. dollar was agreed to be depreciated in international currency markets in order to control mounting U.S. trade deficits) and due to computer trading system models which had somehow overvalued stocks. Like the 1929 crash, it resulted in a daily cascading fall in the stock markets.

The .com Bubble Burst and Terrorist Attacks on 2001: The inflation of tech stocks before 2000 through overvaluation, inevitably led to a crash.  The NASDAQ plunged about 7%% during the period, which was made worse through the terrorist attacks.  The terrorist attacks across the US resulted a one day drop of 14% in the S&P and the Dow dropped by 7.1%. Airline stocks were hit the worst since flying was banned shortly and then flying became a dangerous and labored process, discouraging travel and tourism. Gold and oil jumped in price as business confidence plummeted.

The Great Recession of 2008: During trading on Sept 29th, 2008, the financial crisis began and the Dow Jones Industrial plummeted 777 points. It was a lengthy recession where the markets finally hit bottom on Mar. 5, 2009, where it lost more than 50% of its value to 6,594.44 on the Dow Jones. The sub prime mortgage fiasco hit when the US government raised interest rates 6 times which caused home prices to fall. By 2006, and the damage spread to other financial markets and eventually the markets collapsed and had to be bailed out. In 2002, Warren Buffet warned that this situation was a financially lethal situation.

The Coronavirus Crash: The stock market crash we’re most familiar with and which history hasn’t rewritten yet, is the Corona Virus crash. It was a global event where countries had to shut down industry, travel, retail, causing huge losses in GDP, taxes, and consumer buying power. The crash started weakly in February but intensified as the pandemic spread across the world and hit the US hard. A series of 10% to 12% daily losses happened during the peak in mid March.

Not much could be done about the business and manufacturing shutdown, other than to plough stimulus funds into the economy to bridge the period expected to be one or two years. Unfortunately, most of the money ended up in the stock market where it was deposited into corporate bank accounts.

Is the Stock Market Bubble Inflating Too Big?

And now as more stimulus money is poured into the economy just as the pandemic recovery begins, companies and some citizens are awash with wealth, which could lead to inflation as they begin to spend this summer.

In each market collapse, a bubble period precedes where investors/companies were in a euphoric state and they spent assiduously.  Goods production soared to meet demand. Then when supply reaches its peak to overssupply, prices of commodities and products plummet, leading to layoffs, and selloffs of financial assets.

With this next stock market crash, there may not be any way to hedge against it, nor an investment that will survive the coming devaluation. With trillions of extra money supply, the flood of dollars could result in a huge devaluation of the US dollar — a currency the world is relying on. Worse, is that cryptocurrency could result in Americans abandoning the dollar too. If the dollar crashes, the US government’s tax situation would be precarious and investors would divest of US securities too. Rising interest rates, failed debt repayment, and rocketing unemployment would send the US into a major depression.

Definitely a situation calling for hedging strategies, good advice, and perhaps international diversified investments. Given this is complicated, you should be consulting with a competent, seasoned investment advisor.

Now in mid 2021, the economic situation is a little better. The banks are said to be in better condition, people have a lot of savings, and there’s huge pent up demand for housing and goods. Yet there are other negative crash indictors to consider.

Let’s take a look the most troubling and self-explanatory factors:

The workings of the financial industry are complex, regulated, convoluted, and vulnerable to drastic government fixes, which we’ve seen in the past. This is the hidden factors in system breakdown, something few experts could anticipate (Warren Buffet).

If “trading circuit breakers” are all the exchanges and the government have to control stock market crashes, then the next crash could be painful. There are a sizable number of self-directed retail investors who might sell-off quickly. These are people who can’t distinguish between a correction and a crash. They’ll bail out completely to ensure they have rent money.

Note:  The statements and information presented in this post is not intended as professional investment advice. It is solely an exploration of stock investing and the risks, perils, and behavior of stock markets and the economy. No one should rely on a single source of information or a single stock market and investing professional’s advice.  The overall message of the post might be to diversify stock, real estate, and cash/gold holdings as a hedge against stock market crashes.  Investors should look into hedging strategies but be aware that even hedging may provide limited protection from a crash.