The housing market in Dallas, Austin, San Antonio, Houston, and Fort Worth are seeing a dramatic change. I’ll be updating this outdated post shortly. Please bookmark or see the Dallas post for reference on the Houston market.

Homes sales are picking up in Houston where homes prices hit an average $176,000 according to Zillow. Zillow further predicts a 5% rise, yet this estimate might not take into account rising oil prices and gasoline prices.

In the last 11 months, oil prices have risen almost $30 a barrel and that has the whole state of Texas looking good going forward to 2019.

Home prices reached their all time highs. 7,070 single-family homes sold in April versus 6,611 a year earlier. For the third straight month, the best-performing segment of the market consisted of homes priced in the $500,000 to $749,999 range, which shot up nearly 30%. The luxury market – those homes priced at $750,000 and above – rose almost 5% after being flat for two consecutive months. Sales of all property types was up 3.2%.

The devastation of Hurricane Harvey seems well into the past now, and Houston seems to have grown stronger because of the events. It’s set to be one of the top performing housing markets in 2022.

The forecast for 2022 is positive for more economic growth (estimated 2.8%).

It can take months to a year to recover from the damage typical in hurricane and flood ravaged areas. Houston seems to be very resilient.

In fact, Houston is one of the healthiest housing markets in the US now, with damaged homes coming back on the market and all housing related personnel and resources back in action.   The average price jumped 5.2% to $305,092.

Sales of townhomes and condominiums has not recovered however.  Sales rose only a half percent in April, (a total of 598 units sold versus 595 a year earlier). The average price rose 5.9% to $220,704. Inventory held steady at a 4.0-months supply which is high. 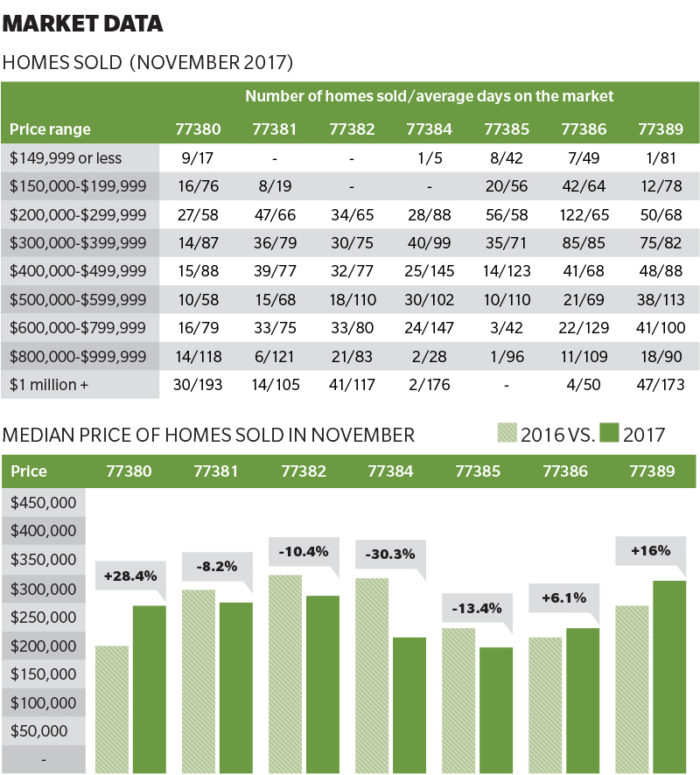 In Woodlands TX, the recovery continues as well. Enjoy this infographic report from communityimpact.com about the Woodlands market in November.

What’s the Forecast for the Houston Housing Market for 2018 and beyond?

A bloomberg report says it well: “Far from declining, prices and rents are expected to rise given the sudden housing shortage. Out-of-state investors have even started to swoop in to acquire damaged homes to repair and sell or rent.”  “It’s one of the few cities that’s been fast-growing and relatively affordable. That’s going to change now,” said Nela Richardson, chief economist for Redfin.

The new economics of Houston will take hold. Research reveals that hurricanes typically raise home values for 3 to 4 years, so there’s no reason to expect any change. In addition, Houston has been home to immense sprawl creating very cheap housing but that access to cheap land may change.

Pre Harvey forecasts were of growth, and post-Harvey, Houston may have one of the strongest markets going into 2018 and 2019.

The Houston-The Woodlands-Sugar Land metro area reportedly created 43,200 jobs in October, according to the Texas Workforce Commission – the largest single month job gain on record.  This job and economic strength will drive home sales and draw in more workers from other states and cities.

With the price of oil rising slightly, the Houston economy looks poised to excel in 2018.  Rents andhome prices will rise. And if billions were knocked off Houston property values, that’s about to get recovered in 2018.  The situation might well be the same for Los Angeles real estate as the fires go out and rebuilding begins in LA County.