Facebook has fared much better than most companies in 2020 despite the pandemic shutdown. And experts feel 2021 will be a phenomenal year for the FB stock and earnings.

With a slate of new, hot products, the social media giant is competing in all the right places.  FB’s stock price should rise to new highs.  Facebook’s strategy may eat into the profits of Amazon, Google, Zoom, and social media giants.

Should you buy Facebook stock this year? There’s some big reasons to buy it, and some dangers to know about.

Facebook was one of the best performing stocks during the Corona Virus pandemic. This might only be due to the fact that billions of people were not working and thus using the platform more. The recent ploy by some corporations to use discrimination to lower their advertising costs and improve their brand reputation isn’t working.

Zuckerberg is not being fooled and those companies will have to return. The companies, some of them not doing well this year, are blackmailing Zuckerberg to stop posts from some hateful people from free speech. The extent of the exposure of the hateful posts is minimal. They rarely get seen by anyone, so the matter’s being exaggerated for other purposes. Zuckerberg is standing firm against advertiser bullying.

The fact Zuckerberg is protecting FB’s own corporate and brand interests is key for investors. He won’t allow “price breaks” for any group or bullying. He’s protecting the company’s value proposition to all advertisers and partners.

And as the pandemic eases this late summer and early fall, more people and business owners will be more familiar with the platform. That strengths Facebook’s revenue base. Either way it never loses.

And Facebook is a prized lead and sales source for business. Many feel they can’t do business without it.  Google’s ad conversion rates are still higher for now, yet Facebook has more room for improvement.

And Facebook now provides the most reach to consumers.

Should you buy Facebook stock? Should this one equity be a stock you should be expertly familiar with and do a deep dive into its financials and Facebook’s expansion intent? Is the fact that there are no competitors on the horizon and that FB hasn’t fully monetized its advertising potential interest you? Is its rival Google able to keep its dominant share of advertising? See the latest Google stock price.

As time has passed and political events and business trends have unfolded, Facebook is looking more and more like a winner. While evaluating the impressive positives and why you should buy Facebook stock, there’s something to consider.

So before you see all the amazing assets this company has and how market domination is easy for them, we have to look at the biggest threats to Facebook’s stock price.

In life, whenever things get too good, they usually collapse the other way. So while Facebook’s growth and power are awesome for investors, a growing antipathy for monopolies is growing, worldwide.  In this way, Facebook’s strengths (growth, profit, domination) are the seeds of trouble.

If there is disaster coming, it might not come till 2022. The climb will continue until FB’s success and power are too much trouble for the markets and politicians.

Anti Trust is a Mild Threat

If Google is tackled by the DOJ via antitrust and monopoly regulators, Facebook could stave off prosecutors.  Facebook’s business structure and market presence is more difficult to prosecute. Social media isn’t understood as a business channel or as an essential communications channel covered by the 100 year old laws.

Facebook user’s activities are a sideline of their social activities and Facebook can claim it doesn’t control anything. It’s simply an advertising company.

However, Facebook does have a monopoly on social media communications, so in terms of how human beings communicate and learn of products and services, the US government can and likely will designate them as a monopoly.

Further, Facebook does limit users reach in organic social posts. This is frustrating to businesses who must pay to reach users. This one point could push the prosecutors case against them.

If the company is convicted in US courts of being an advertising monopoly who get an unfair advantage with the data they posses, and which stops other businesses from even starting up, it could be broken up and sold. It’s various corporate pieces would still be worth a fortune. How the DOJ would demand Facebook to be broken up is still undetermined.

Still Waiting for the Trump Era to End

Should the Dems win the Presidential Election, all monopoly and anti-trust activity could come to an end.

This is despite B’s interest in Elizabeth Warren as VP. The ruse here is that they want to win the election, and appear anti-corporate, to capture liberal, Millennial, and minority voters, not necessarily to actually break up Google, Amazon and Facebook.

Politics is a game of duplicity, deception, and coercion.

Breaking up these iconic brands is well beyond the scope of a Dem government. So it’s just an election gambit. This means a Demo win would free up Facebook, Amazon and Google for 4 more years of high profit. It shouldn’t be surprising that Google, Facebook and Amazon would therefore support the Dem bid.

Facebook has no presence in China. It is banned by the communists. So Facebook is likely agnostic regarding US China trade issues. Facebook’s presence globally is what matters to the company. So far, antitrust and anti monopoly charges have been low cost. The fines were just a small annoyance to the company which doesn’t affect user engagement or daily usage, nor revenue.

Facebook is a tough business entity to wipe from the business and advertising landscape. It would take strong political will to phase the company at all. Its user base is ardent and wouldn’t understand prosecution. This could be the biggest reason why stock market forecasters and advisors and experts give the buy rating for Facebook stock.

If you look a couple of years down the road, there is little to suggest the company won’t be earning record profits. As the WWW decays, for a world of apps and specialized social media channels, all businesses including small businesses will be desperate for visibility and leads from Facebook.

Consider how Realtors are using Facebook these days. They barely refer to their own websites and MLS listings. And small service business clamor for ad exposure to local audiences who spend a lot of time on Facebook with family and friends.

Facebook’s 4th quarter of last year was the best in its history, while 1st quarter 2020 still brought in $17.7 Billion in ad revenue. 2nd quarter looks to have been subdued with estimates for that 3 month period around 14 to 18 billion.

The experts forecast for the third quarter just ahead is particularly positive, in the 16 to 18 billion dollar range.
And it’s 2021 that stock market investors should be focused on. Because that’s when you might sell your Facebook stock for a fortune. The key to FB stock price strength, I’ll explain.

CNN Business’s finance panel believes sales growth will still be negative. Although they think EPS will grow to $1.37 per share this quarter. They see earnings substantially in 2021 to grow to close to $10 billion for an annual rate of 13.5%.

Because Facebook as a brand is a household name, retail investors might forget just how successful this company is. It’s ingrained to American voters so closely that they don’t realize it’s a company run by Mark Zuckerberg.

Americans feel it’s like a government department, where there media-hyped social conscience must be obeyed.

Check out more of the factors that determine Facebook stock price.

40 out of 44 Marketbeat experts give Facebook a buy rating. 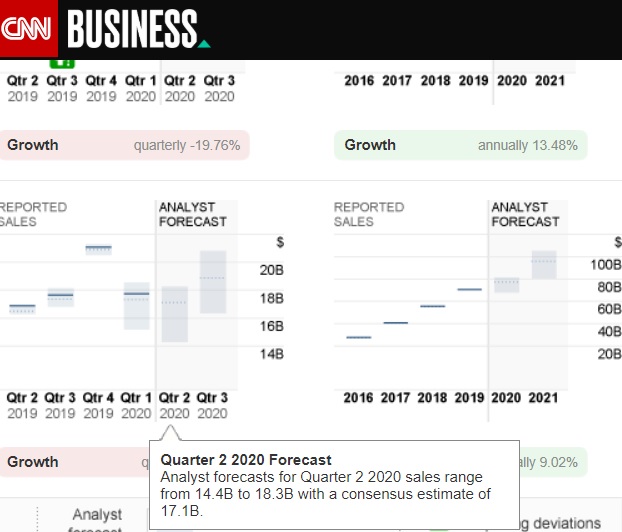 Facebook’s Strengths are Its Weaknesses

Zuckerberg actually asked for western governments to come together and fight China’s influence in internet regulation. That’s a very bold request for a company leader under investigation himself for a similar type censorship and domination of online activity.

More governments realize the power of data, which they’ve ignored. Now with their small business sectors and tax base decimated, they’re likely to take action to get taxes flowing again. Data privacy of course is a joke. Surveys show most people don’t care or are glad that it helps Facebook, Amazon and Google provide more relevant content.

The real battle is for the digital gold — consumer marketing data. Those who have it, win easy. Those who don’t go out of business. State governments and global governments are under pressure to do something for their own constituents. If they don’t act, or act slowly, Facebook, Google and Amazon will literally take over everything in the consumer markets.

Each of these company’s strengths is their weakness. If they chose the status quo, it would take the wind of the regulation movement. But they compete with each other and can’t stop.

The point is that regulatory sentiment isn’t strong. Since these companies control what most people see and experience, they will never hear why monopolies are bad. They control the audience. See more about Amazon stock and Google stock.  Looking for more stock market info and news? Check out Yahoo Finance vs Google finance and stock investment portals.

Blockchain and cryptocurrency appear to be Zuckerberg’s focus, where he come close to printing money.  He’s undaunted by government regulators, and is likely hoping the Dem Party if elected will allow Facebook into the cryptocurrency markets.

Facebook has never ventured into the realm of search, but there’s no reason why it couldn’t. The reason FB and Zuckerberg haven’t is because of the difficulty and the brand damage from not failing in it. But Facebook could easily buy Bing or duckduckgo and gain the knowledge to excel in it.

By integrating search, local business, and shopping search with its social media channels, users could do all their shopping, travel, services and information searches via Facebook.

See more on the stock market forecast for the next 3 months.