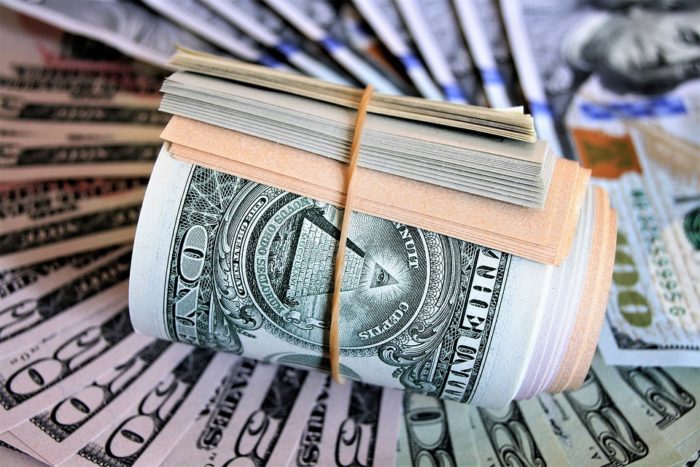 China’s manufacturing sector has been declining, particularly of late.  The communist led country is suffering the worst economic forecast of the last 50 years. China’s in more trouble than anyone will admit even if they print more money to alleviate the losses.

China’s propaganda mills are trying to wash over the tremendous harm the Wuhan virus has inflicted on the world (300,000 deaths) and trying to stop countries from bringing goods sourcing to domestic markets. That’s needed because China supply chains have become unreliable. While the world was left in the dark about the danger of the virus, China stockpiled its own supplies in advance.

Now many countries lack medical supplies to help them deal with the outbreak. Some countries still have no face masks and are heading back to their workplaces.  There is a big disconnect for many nations such as the US, Canada, Australia, France and the UK.  China’s trade surpluses will shrink dramatically as countries deal with their new debt loads.

While the media are glossing over this rejection of China, the fact is the US cannot continue importing China products. The import era is over, and it coincides with President Trump’s commitment to America First.  The Democrats focus on sustaining China’s cheap labor supply chains won’t sit well in the upcoming election.

With so many unemployed, and Fed funds drained, the only solution is to raise protective tariffs to build production in the US.

With virtually no government growth, the private goods and private services sectors have risen to compensate.

As you can see, the difference between U.S. residents’ foreign financial assets and liabilities, was a deficit of $10.95 trillion at the end of the third quarter of 2019. And goods and services trade has taken a turn for the worse.

Investment in US companies 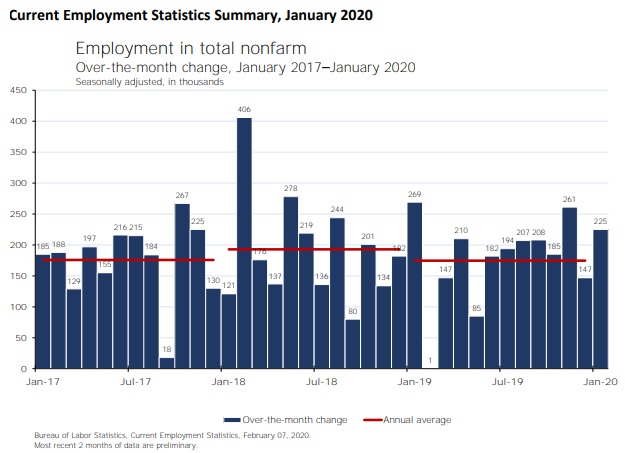 Job Creation in US. Chart courtesy of BEA.gov

We look to US economists, unbiased, and ask where the key factors are headed.  Of course, they only focus on specific factors that may not be reflective of real economic trends. They all seem to be in agreement that GDP will fall and perhaps unemployment will rise.

Of all the factors listed above, we might focus on interest rates. With rates declining, there is less pressure on consumers and US businesses. If President Trump uses quantitative easing to lower the dollar and build demand, US manufacturers should be able to continue getting established and producing.

They’re still in the nest so to speak, not ready to compete full head on with an establish Chinese export machine that enjoys low currency rates, low wages, and unfair trade deals. The President is slowly dismantling China’s tactical advantage, and it’s another sign the US economic forecast might be brighter than most believe.

The conference Board forecasts that US economic growth will decline to 2.0% in 2020 from 2.3% in 2019. The Fed believes GDP will slow to 1.8. This is one time when the politicians wish they’d made sure the poor are housed and have more money. The Fed believes unemployment will rise to 3.7% in 2020.

Business capital expenditures look to be declining and this may be the most worrisome trend. However, with China shut down and the rest of the world in recession, investment money is entering the US because this country looks to be the strongest on the globe.

Data above from the Bureau of Economic Analysis

China’s economic forecast may be worsening, but its balance of trade is very strong thanks to the US. Its trading partners are running huge deficits.

China is reeling in the reality of 5% GDP growth when it has planned for 8%. They fully expect the US and other countries to support China’s supply chains. However, now with the virus scare, companies around the world are reassessing their dependence on China.  They had forgotten the economic, political, military, cultural and health risks they’ve been allowing for over 2 decades now.  The trade deficit with China is stubborn, with wealthy American consumers continuing to buy overpriced Chinese exports. This is a big problem for the President.

However, the long term outlook looks a lot brighter now.

The America First transition looks to be wobbling its way forward as the President paves the way for US companies to grow, and place barriers for unfair foreign manufacturers. US manufacturing and jobs creation however have slowed with the trade turmoil.  Both China and Mexico have expressed reluctance to continue trying to wear down President Trump.

What are the key issues to watch:

The best news is the Fed’s expectation of interest rate cuts which the stock markets loved this week.  Democrat’s  claims of big inflation and crashed retail sales have not materialized.  The economy keeps rolling forward, making the 2020 election predictions favor the President.

Chinese leaders suggest in formal statements that they want to trade. President Trump has initiated a 3 phase trade deal that would create $60 billion in agricultural exports. Good for US farmers but not something that will delight US manufacturers and tech companies.

A good guess is that this trade deal will fall apart. With China in recession, it can’t afford to buy from the US. Chinese leaders have resistance so ingrained, they will likely not meet the agreement. Experts say China has never lived up to agreements.

How It Looked in the First Quarter

“As small businesses across the country make up 99.7% of all U.S. employers and 64% of net new private-sector jobs, they truly are the backbone of the country’s economy and an aggregate indicator of its health and status” — from Fundera Report on the Booming Economy.

Latent demand for goods in the US remains high, and when tariffs and US manufacturing grows, Americans will buy more US made products.

Fantastic Outlook for US Business and the Housing Market

The lagging housing market and small business sector should regain their stride once multinationals are forced to build factories in the US (Jan 1st, the 25% import tariff took effect. No free access for China is expected). The coming 10% tax break for the middle class makes 2019 look very good.

According to the St Louis Fed, forecast factors are as follows:

Despite the short term volatility and negative stock market predictions, the US economy will grow. With inflation reported this month at 2.4%, there is little reason for the Fed chairman to raise interest rates.

And government spending wasn’t adding much to the economy anyway.

Good Times Ahead for American Producers

What this report translates to for 2020 and beyond, is stronger employment security, prime market access for US companies, better housing, more opportunities for young people with big student loans, returning entrepreneurial spirit, higher wages, and hope for a poverty/housing that has been plagued for many years.

Consumers are not fulfilled and production capacity will grow. The talk of embargos on US goods are overstated for sure. Resentment from Europe, Japan, Canada, and Mexico will subside. US manufacturing output will grow in quality and the world will want US products. Who wouldn’t want reciprocal access to the US market?

American consumers are expecting good things. They’ll buy any house they can get their hands on and they won’t be buying as many Toyotas, Mercedes Benz and Beemers as before. Fords, Chevys and  Tesla’s will be in good demand.

Trading economics forecasted 93.1 consumer confidence rating for fall 2018.  It’s actually at 100.8 despite all the political and trade volatility.

The End of Free Trade

The end of Free Trade was predictable. American poverty, debt, and misery and lack of control has brought it to a stop. Fair Trade will be the new norm.

The defense of globalization rests on viewing Americans primarily as consumers, not workers, based on the assumption that we care more about low prices than about low wages — NY Times article

Free Trade wreaked havoc on American lifestyle, wealth, politics, and optimism. It was a concept for the 80’s, but it’s not the 80’s anymore. It has ruined people’s lives. The stock markets continue their happy upward direction.

A US housing crash is unlikely and the stock market looks pretty healthy. However, a global recession would affect the US as would a China collapse. President Trump knows it, which is why he keeps pulling back on 100% commitment to many of the policies he sets forth.

Housing starts keep growing as depicted below, and with demographics so positive (Millennials and Gen Z’s coming soon), the demand will be steep. It’s a fantastic time to be in US real estate.

It’s this matter of self-esteem of the American people that’s so critical. CNN and other media paparazzi think esteem is something dished out in scathing news reports. But what’s happening is a nation’s self-esteem is being regained and this time inoculated against media manipulation (the Media and big advertisers don’t like that).

How Could Anyone Vote Against This US Economic Boom?

The US renaissance has generated massive employment and improvement in lifestyles. And while the rich have benefitted most, as usual, the game isn’t over.  With more investors making the transition to US equities, we see a reduction in hysteria over predictions and forecasts.

“Overall the report is good news insofar as it suggests the economy still has some capacity to grow at an above-trend pace without generating much inflationary pressure,” said Michael Feroli, an economist at JPMorgan in New York — Reuters report

In the meantime, the latest jobs report reveals continuous, excellent 200k+ job growth each month and droves of people coming back into the workforce. Skill shortages are a true threat to US manufacturing revitalization. People will have to be trained.  The education industry should enjoy their outlook.

The unemployment rate rose to 4.0 percent in June from an 18-year low of 3.8 percent in May as 601,000 job seekers entered the labor force in a sign of confidence in the labor market — Reuters report.

The housing market could be better, yet construction is okay and demand is certainly strong.

This chart above shows the growth of the US housing market will likely pick up its pace in the last half of 2019.  Interest rates are expected to stay low, putting little pressure on defaults, and keeping demand for new construction nice and healthy. Homebuyer are sitting on the fence hoping for lower prices, however a housing market crash is very unlikely.

This kind of growth is more resilient, aware of danger, ready for events, so it’s in control. It would take something massive to stop its forward thrust.

What’s the last word in the US economic revival? Momentum.  It’s gone through its temporary adjustment period in the winter of 2019 and there’s lots of forward drive into 2020. The US economy is robust and growing and few will want to see this fantastic, business life-giving economic cycle end. As stock markets modernize and adjust, we’ll see the DOW Nasdaq and S&P all improve in 2020.

Return to Part 1 of the Economic Forecast