The 2020 Presidential election is not far off. It’s a key election that will determine the direction of the housing market, stock market, the US economy, and the well being of the nation.

It looks like many high visibility forecasters are reserving their picks for the winner. No need to wait any longer as the real candidates are now present.

It’s abundantly clear the deliberately leaderless Democrats will choose Joe Biden to lead them in the 2020 election. And while the Dems have flourished in their 24 hour a day Trump attacks with no focus for Trump retaliation, Republicans will now have a new, fresh target in their new leader. That changes the electioneering dynamic.

The Democrat’s obvious challenge is that President Trump has had success.  And its unlikely his popularity will fall lower than it is now. Trump’s popularity has stayed consistently at 37% so he doesn’t appear to need the popular vote.

Still the Democrat’s media blitz has taken a bite out of him. Big money put into media can buy votes.

Who Will Investors be Supporting?

It’s a difficult time for the Democrats, given the US economic strength and forecast. GDP, employment, business health, taxes, are as healthy as they’ve ever been. Investors have a lot on the line if they should choose Biden and the Dems.

And it’s a tough choice for voters who risk ruining the economic party with a change of Presidents. They may be paying for their vote with their own jobs and potential foreclosure of their home mortgage. If Trump reminds them of that, it could be curtains for the Dems.

The potential massive fleeing of investment money in 2020 (if Trump loses) could cause a recession sending stock markets and housing markets crashing. But that’s not to say the Dems would keep their promises.

Can Trump Improve His Chances?

If Trump should take measures against rich multinationals (monopolies and anti-trust), small US business would flourish. Multinationals don’t support him anyway, and many of us wonder where all the money is coming from to trash him everyday via the media.

And if housing construction was to be stimulated, it promises to keep this business cycle going a long time.

It’s this positive long term, status quo that will firm up voter’s intent to keep Trump in office. Perhaps it’s this fact that makes the Dems more determined to harrass Trump and push to impeach him. Have a look at the Presidential report card.

When Trump was absolved by the Mueller report, it was abundantly obvious the fiasco was another Democrat ploy to gain sympathy votes. Now they’re attacking Mueller and trying to discredit that prolonged dissection of everything Trump has done in the last two years. If they couldn’t find one single infraction with all their digital snooping tools, it seems a farce.

The only thing keeping the Democrats in this Presidential race is Trump’s inability to communicate the value of what he’s doing. He has no media channels to push out a more detailed presentation of his economic strategy and the results. It’s just generalizations and tweets via media channel that reaches few voters.

Hugh Hewitt of the Washington post feels the 2020 election winner is a no brainer. 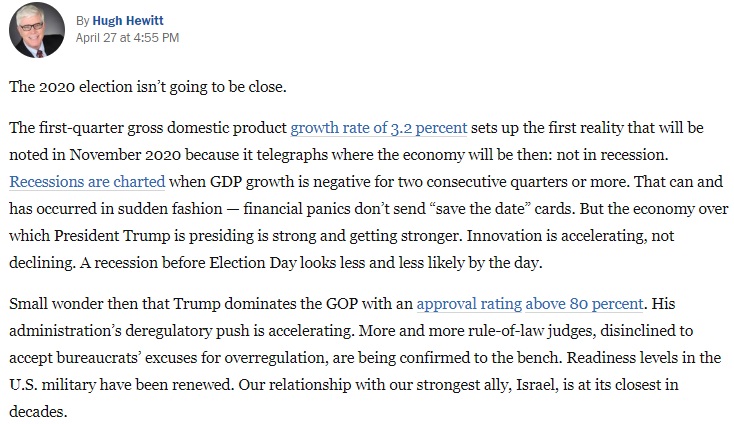 The key thing Trump has going for him is a two year record of economic success (including overcoming the recent winter downturn) and the fact that voters know what he’ll do.

President Trump can boost about some big wins the last two years:

In trying to build up a case to support the election of a Democrat President we run out of information. Here’s what we can say about Democrat intent:

The democrats two leading candidates for the 2020 Presidential election are old caucasians 76 and 77 years of age which will not appeal much to the Democrat demographic. How long will they last in office? It’s obvious that their only purpose is to get an edge on Trump. It’s a hyped up, radically politically correct, emotionally manipulative strategy to get elected.

The Vegas Oddsmakers might offer the best forecast for Election 2020. Here’s the latest odds from Oddshark  and Sports Betting Dime.

My forecast is that Donald Trump will win the 2020 Presidential Election.

I’d like to hear your thoughts on the strengths of the Democrats and how the United States will benefit from electing them in the 2020 Presidential Election.

Whichever party you’re voting for, it’s good for Americans and the rest of world to know what’s at stake in the 2020 election.