When Is the Best Time to Buy a Home?

Spring 2017 is almost here in Toronto, and tens of thousands of homebuyers will make the decision to buy a home. Yet buyers are confused, not because it may be a housing bubble, but because they can’t picture the value clearly, perhaps in numbers.

The question of whether to buy a home isn’t about seasons, and housing type, or even the neighbourhood. There’s more important factors to considers and you should weigh your pros and cons carefully.

But for some Toronto residents, do they even have a choice? We all have to live somewhere, and it doesn’t seem there’s enough homes to go around.

While Canada is suffering its worst ever performance in attracting foreign investment, foreign purchase of homes here has been high. Foreigners are desperate to park their money somewhere. With that, Vancouver, Kelowna, Toronto, Mississauga and even Montreal have seen their housing markets explode in price. Many of these properties sit idle and empty, waiting for a quick flip.

Yet our hyperactive housing market hides a big secret — our economy is not so hot.  If not for the US revival occuring now, you’d have to say Canada’s future is very bleak — hence the lack of investment. Foreign investors are giving Canada a big thumbs down.

When BC applied its foreign buyers tax, it effectively killed the housing market in Vancouver. And with Toronto booming and its prices continuing a rocketing pace, will the Ontario government take similar action? While TREB might describe the market as balanced, it is a precarious, bubble like one where an irreversible slide might grow to a crash. Is this really a good time to invest in Toronto homes? Let’s look further. 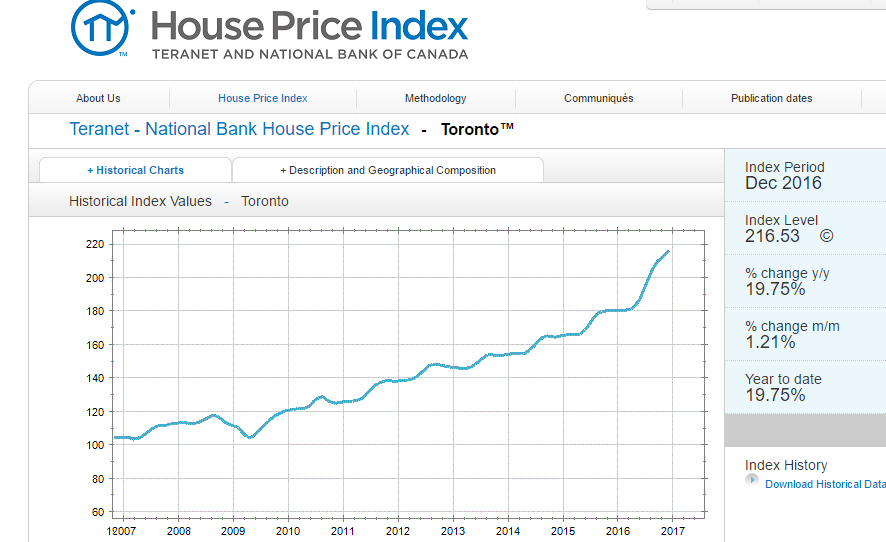 Screen Capture courtesy of Teranet and the National Bank of Canada

The Key Role of Foreign Buyers in Toronto Real Estate

Foreign money may well be the key to Toronto Real Estate Market in recent years. Canadian investment in US property has fallen dramatically because of the sagging loonie, and perhaps due to new border restrictions expected by the Trump government. Canadians will now only be able to afford to buy in Canada. And many are selling their US properties to cash out their windfall. With that, they’ll likely be competing for GTA homes.

With the loonie so cheap against the US dollar, properties in Toronto, Mississauga, Oakville, and York Region look very inviting to Middle Eastern, Chinese and US buyers. Political and economic turmoil may well see foreign investors tune into Canada as a safe alternative to the US. Toronto real estate will be their first choice.

The Toronto Real Estate Board just reported another record month of sales on the Toronto MLS for January, and there is no sense or data to suggest condo and home prices won’t keep climbing.

8 Fundamentals of Rising Home Prices to Look for:

1. limited housing availability and people have to live somewhere
2. continued staunch refusal of homeowners to sell their properties
3. low mortgage rates rising only slightly
4. influx of foreign investment money from the Middle East, Russia, Germany and China
5. strong US economy set to spill over into Canada
6. high numbers of Millennials looking to buy their first home
7. condo rental prices are high with low availability meaning a sizble pool of potential buyers exists
8. immigration volume into Toronto is high thus soaking up rentals and creating more buyers from across the globe

The above fundamentals speak well of home prices in Toronto. As long as a US economic disaster doesn’t occur, the Toronto market looks okay. The question then becomes one of do you really want to buy vs rent? Can you afford repairs, taxes, and to commute to this location? Should you buy now so you can lock in at lower mortgage rates?

Worries on the Horizon

However, there is the negative side of the coin. Canadian debt loads are very high, bordering on crisis levels, and should interest rates rise, these same people may face foreclosure. If mortgage rates rise, few buyers will be able to buy at today’s prices. If prices are too high with a threat of a housing crash, fewer people will willingly take that big risk.

The biggest factor for a housing crash or continued growth comes from the US. The repatriation of jobs and business investment back into the United States is the biggest news story of the last 3 decades but there’s worries Canada might be shut out.


If the US can carve away at its monstrous trade imbalances and bring back the American middle class, the effects on American wealth will be dramatic. We’ve all seen what this wealth has created in Dubai, China, and Mexico. When all that wealth returns to the US, it will spill over into the Toronto Real Estate market.

The Canadian economy, particularly Toronto’s is intimately tied to with the US, both parties would be devastated by a break in trade. But Donald Trump may have little intention of alienating Canada, even with Justin Trudeau at its helm. The biggest threat we face is Donald Trump’s dislike of Justin Trudeau.

Trudeau’s lack of sympathy and joy for the great American revival will gnaw at Trump’s government.  Canada may receive a weaker bilateral trade agreement, which Trudeau will have to negotiate. It could be much worse than the softwood trade has been.

The second biggest factor will be the lack of housing availability. Ontario’s governmental regulations on land development near Toronto is crippling growth. Its plan to intensify development in certain cities such as Markham, North York, and Mississauga will supercharge prices in those areas. Ontario’s high flying tax increases will further put upward pressure on house prices and make home ownership more costly.

Statscan reported job growth only in Ontario, with 20,000 new jobs. This followed on the heels of last month’s 74,000 new part time jobs. People working part time or with low wages can’t buy homes. The future lies with a growth in Canadian exports (the low loonie didn’t make that happen, likely because other countries are manipulating their currency downward for persistent advantage).

With demand continuing right through the winter, it’s hard to believe it won’t be a record spring for the Toronto market. The anticipation of the great American Revival will play increasingly on the psyche of hopeful buyers and those who would like higher paying jobs. It’s this anticipation that will have the greatest effect on where anyone will willingly purchase an average $600k to $1.5 million dollar condo or home.

It takes courage to buy a home, and courage should be built on a systematic pros and cons assessment of real estate investment.  I hope your analysis gives you the right outcome. If you’re looking to buy in the Toronto area, please visit my Toronto homes for sale page.

Realtors Conference and Expo Orlando Florida – NAR Realtor.org Convention
Real Estate Conferences Should you be booking a spot at…