What’s the Outlook for the CAD?

Businesses, snowbirds, currency speculators, forex brokers, and importers in Canada are all trying to forecast where the CAD USD currency rate is headed.  Currency rates are complex however the data is suggesting this latest downward slide will continue.

Only 2 years ago, some red-faced currency rate forecasters expected the loonie to plunge to 60 cents USD. That forecast seemed outlandish and unlikely given Canada’s rising economic output.  Politics and persistent US strength have changed the USD/CAD outlook however.

The Loonie fell to 76. 43 USD marking it’s lowest conversion rate since last June. That might scare some and put a smile on the face of others. At 75 cents US, US buyers will get an extra 33% in Canadian money. Canadian Realtors should be looking to attract US property investors.

This chart shows the USD weighed against other major currencies such as the Yen, Euro, CAD, AUS, BPD etc. If NAFTA conflict is resolved as expected, oil prices fall, and US interest rates rise, the USD will rise again.

It’s Not so Hard to Understand the Loonie’s Fall

The loonie is plummeting because there is nothing economically supporting it, and investors are seeing Canada’s vulnerability. Smoke and mirrors and government currency manipulation are propping the CAD rate right now. But the Bank of Canada can’t keep buying up Loonies.

Low US tax rates puts Canadian businsses at a serious disadvantage against larger US companies.

For those of us in this category, the forecast appears to be for a lower Canadian dollar. Will it hit 60 cents? Can the Canadian federal and provincial governments lower our taxes or top their spending? Will foreign businesses suddenly decide to invest in Canada again?

Will anyone invest in Canadian oil, mining, and agriculture when BC is bottling them up so it can’t get to market? Is the US becoming self-sufficient in oil and gas? 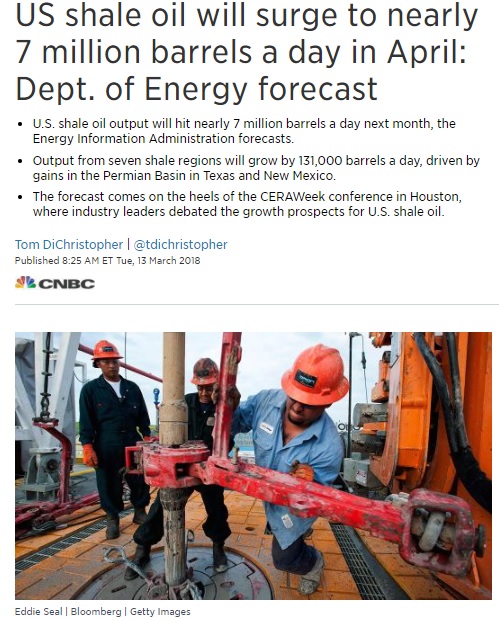 Canada’s energy sector drives the loonie, particularly oil prices.  If OPEC is unable to continue their tactics and with US shale producing 7 million barrels a day, thus flooding with oversupply, oil could plunge to $30 a barrel. That might see the CAD/USD exchange rate fall below 70 cents this summer.

Most experts predict oil prices will stay where they are at $60 a barrel but this video below says historical data is suggesting a fall.

The US is set to overtake Russia as as the top oil producer. And in Canada, the oil sands would have to be shut down as they can’t produce oil at $40 a barrel. Calgary may be headed for a crisis.

“U.S. shale growth is very strong, the pace is very strong … The United States will become the No.1 oil producer sometime very soon,” from Reuters.

Is TPP Really a Good Deal for Canada?

When Trudeau recently signed the TPP and agreed to open trade with Pacific Rim countries, it leaves Canada further vulnerable to being taken advantage of by countries who don’t buy our stuff. Our global trade deficits will rise even if global economies are doing well right now.

And China doesn’t concern itself with pollution or carbon production limits.  Our trade deficit with the world can only worsen.

More statistics related to the CAD are available at Trading Economics.

It isn’t only that our economic performance sucks, it’s that the US is booming. Despite all the talk of interconnected supply chains, the US could do fine without our input.

It’s stock markets, foreign investment and housing markets are strong. And the boom looks like it will continue, because as Donald Trump has stated, trade wars don’t hurt the US, they hurt the other countries who are addicted to trade surpluses with the US.

Trumps threatened trade tariffs as part of his negotiating style, are making investors very aware of Canada’s precarious situation. For any investor, it is wiser to invest in the US which is why forex traders and investors are buying greenbacks. It’s safer with a market 1000% bigger with 350 million consumers with lots of US dollars to spend.

Most of us know that trade with the US will probably be the same as usual, however Trump has said he wants auto industry jobs back in the US, and the US shale oil and gas industry is booming. Exports of Canadian softwood, dairy and wheat are going to fall, NAFTA or not.

The US has a 20+ Trillion debt, and a massive yearly trade deficit that they have to deal with. Canada is just a casualty in this war against trade deficits.

As you can view on the Canadian Federal Government Website, here are the key factors that determine the USD/CAD conversion rate:

Most of these determinant factors of the Canadian dollar currency rate are weakening. And if Toronto and Vancouver’s housing market should slide, foreigners will be withdrawing their money fast. Verdict: Toronto housing crash = big loonie drop.

Justin Trudeau’s 1970’s ideology, inability to lead, and his pro-carbon-credit fanaticism further ensures Canada will struggle to compete. We have the worst record for foreign direct investment, and nothing is coming to the rescue.
If Canadian companies can’t get their products to market in the US, no one is buying CAD. And if the loonie is low, who would consider investing in Canadian businesses struggling to create to generate revenue?

Canadians are seriously indebted and as interest rates rise, consumer spending will fall, further dampening corporate earnings here. Investors will flee for big the big returns south of the border.

Check the USD/CAD forecast if you’re considering buying in the US housing market.