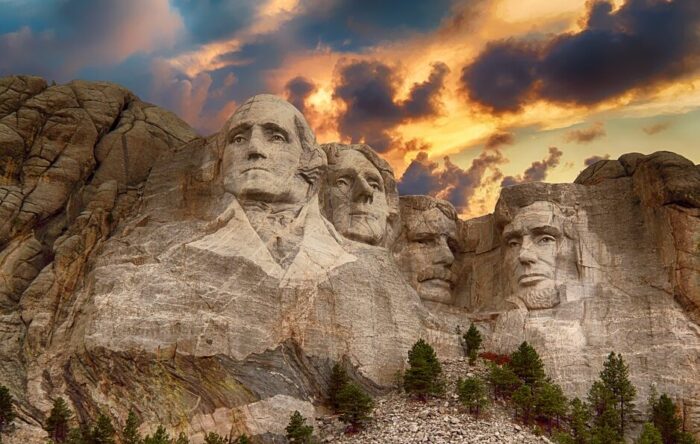 Whenever you travel, you’re hoping for something with its own special feel and culture.  Places like San Diego, Vancouver, Banff have that. So does Mt Rushmore. (See pics on my Mt Rushmore Pinterest page)

Mount Rushmore in South Dakota sees more than 3 million visitors per year. It’s a spectacular setting for the world’s most impressive sculpture. It’s on a scale that’s hard to believe. As you enter the walkway from the parking lot you’ll be captured by the awesome view of the the four “great faces” of the presidents chiseled in stone.

A Man and a Dream

Because of these old mountains, it was the perfect location to build an incredible national monument — to showcase American history and create something awe inspiring for the American people.  They say your greatest accomplishments in life are over by the time you’re 30. Well, they chose an old guy named Gutzon Borglum to build it and it was his patience, and his sons, who created perhaps the world’s greatest marvel.

I visited there in 1990 and it is fascinating. Biker clubs choose Rapid City and Mt Rushmore as their summer vacation spot. This summer with the growth in travel across the US, it could be the highest level of visitors ever.  Wind and water have worn down the mountains here giving it incredible character.

The mountain rises above 5700 feet and the highway goes down to Rapid City. There’s a quaint town called Keystone, which you and your kids will get a kick out of.

Mt Rushmore was also featured in the hit Alfred Hitchcock movie North by Northwest. If you haven’t seen it, find it online. An amazing film made in 1959 and that was ultramodern in those days.

And, National Treasure, Book of Secrets with Nicholas Cage was set in part here too.

You can camp here, see the underground caves, go mountain biking, see the old western town Keystone and just enjoy the beautiful character of this place.

If you’re driving across the north US, you have to stop here. Don’t miss a real wonder of the world.