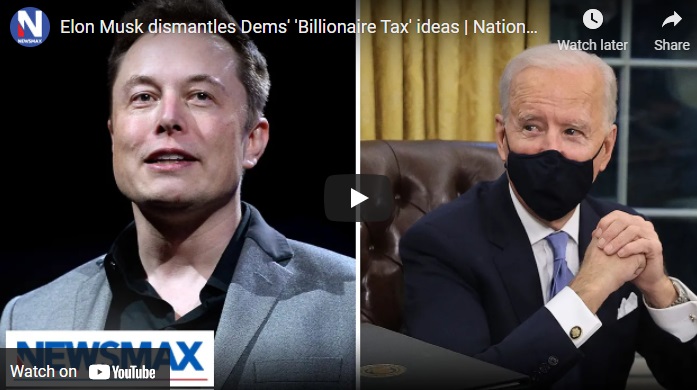 Will Taxing The Rich Stifle Investment in the USA?

President Biden and the Democrats are pushing ahead with another facet of their agenda, that of taxing the super wealthy. Well, what could possibly go wrong with that?

While few Americans oppose the general intent of taxing the rich, it has to be asked whether this move of going after 700 billionaires is going to backfire. Taking such a move impulsively could result in great harm.

Biden calls his new tax raid a $1.75 trillion expansion of the social safety net to be funded by the wealthy and big corporations. In typical Liberal fashion, it is a lunge at redistribution of wealth, not a method of creating new wealth.

“America is still the largest economy in the world. We still own the most productive workers and most innovative minds in the world, but we risk losing our edge as a nation,” he said. — from MSN report. Is Joe Biden and the Democrats the champion of US productivity?

Biden warns that if his “historic plan” isn’t approved, America will lose its edge. LOL, well that ship has sailed. What if Joe’s ship of fools are headed straight into the perfect storm? It’s his political career that could come to a quick finale when the idea is rejected. And the more time Republicans and Democrats have to think about it, the more likely this bill will be trashed, even at a reduced 1.7 trillion.

Okay, so yesterday they appear to have agreed to a $1.2 Trillion package.

Another number of questionable items are hidden within the bill, and Republicans would be foolish to let them pass. It would hurt them in next year’s elections.

Those who voted against the Democrats during the last election denounced the Democrat tax proposals as ultimately destructive. The outcry had quietened until recently, not even one year after Biden has taken office.

Now even Joe Biden is admitting that his Presidency is on the line with this tax. That will only encourage Republican billionaires to hammer in the nails in that coffin.

“This is a pretty novel approach that’s being thrown together in a very short period without the benefit of public overview and comment,” says Steve Rosenthal of the Tax Policy Center. “There’s so many ways it can be wrong.” A billionaire tax may not be constitutional. Rosenthal said that a conservative judiciary could overrule Democrats’ agenda if they pay for it via a billionaires tax. – from CBS report.

One thing to consider too is that few people empathize with the losses of Billionaires. Most feel they don’t use their wealth very well and investments don’t trickle down to them. Billionaire comments and sentiments generate skepticism and anger. Musk could be used as a whipping boy, although he thinks he’s a prophet.

US Economy is Recovering Well

It’s the perfect time however to take money from the super wealthy. The economy and stock markets are hot. Billionaires have the money, aren’t sure what to do with it, and are exploring some questionable ventures such as $200,000 a seat space adventures. They do live in rarified air this group of overly monied people.

Yet the wealthy have resources and can fight back. And Democrat-biased billionaires don’t like their money confiscated. And the way the proposed bill reads is to apply tax to the apparent value of an investment, not its value at sale. If the Billionaire is assessed when investment value is really high at market peak during the next year, and then the markets crash, that person or corporation could owe more in tax than their investment is worth. That would be a bad situation.

Yet, the details of how they want to tax them are hard to comprehend. The whole plan is ill conceived, impulsive, and could lead to a recession. We really don’t know what Billionaires think of the tax plan, but you have to think they don’t like it, even if they still have more money than they know what to with.

If the Billionaires should decide to hide their fortunes, take them outside the US, or retaliate by not investing in business projects, it could ruin the recovery. Stock market investors will get the hint soon enough, and the much predicted sell off crash could begin.

This tax will certainly affect Elon Musk’s ambitions even though he’s benefiting from free gifts from Democrat’s renewable energy grants and tax breaks.

So what could happen if the Democrats get their way?

What marks Biden, Pelosi and company is the marked inability to peer into the future to see the outcome of what they propose.

We have enough here to understand how feeble taxing billionaires is in resolving the US economic woes. It’s inappropriate and won’t achieve what Biden is hoping for. It’s attempt to punish the wealthy for political gains, but can’t solve issues of excessive imports of China goods, artificially boosted energy prices, and a government that doesn’t support small business.