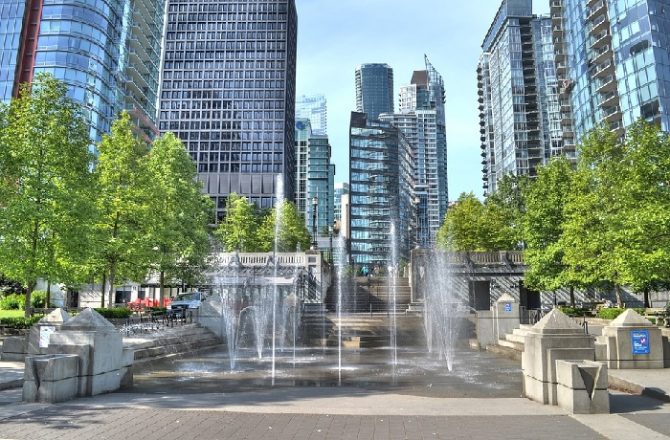 As you may have read in the Vancouver housing market forecast for October, sales of homes and condos have rocketed. It’s unsure of why demand is so intense right now.

That demand has spilled eastward into the interior and the Okanagan Valley, where buyers from Calgary are bidding up home prices there.  See more on the real estate market in Vernon Kelowna and Penticton.

Only a few months ago, it was a buyer’s market as condo prices were falling hard, supposedly because of unfair presale restrictions and foreign buyers disappearing . But that’s all changing this fall as Vancouver’s condos are again the most pricey in Canada.

Despite that growth, high end condos are struggling to sell. One unit on W Hasting listed for $2.788-million, but finally sold at 2.45 million, the same it sold for in 2017. Another unit in Hastings East listed at $525,000, but only sold after a $26,000 price cut. If buyers are smart and know how to haggle on price they’re likely to be successful.

The charts show condo prices are bouncing hard from their recent bottoming, and listings are drying up. If this continues in December and January, the spring season could see significant price rises.

CMHC predicts the average price of a home/condo in Vancouver in 2020 may soar to a record high $983,000 in 2020, and $1 million in 2021. The comparisons between Vancouver condominium demand and prices and those in the Toronto condo market are striking.

October’s rent report from rentals.ca, shows North Vancouver recorded on the highest rent increases at 3.4% for 1 bedroom and 3.9% for 2 Bedroom units. Vancouver 1 bedroom stayed level, while 2 bedroom jumped 6.5% to average $2949 / month.  1 Bds in Richmond dropped 10% in price while 2 bedroom shot up 4.4%. Perhaps a moving up trend is occuring.

Purpose built to rent units has seen some growth in the last 2 months.  During October, Vancouver (314), Burnaby (180) and Port Alberni (141) saw the biggest number of rental units registered.

Given the high prices of detached homes, more focus is put on the condo market by buyers and investors. CMHC’s most recent report is rosy about the Vancouver real estate market.  They’re predicting a housing recovery in 2020 and to accelerate in 2021.

Money Has Moved to the Condo Market

Sales of detached million dollar homes have abated, yet it’s just a switch to a focus in condominiums in Vancouver. This switch has also happened in the Toronto condo market. The challenge for condo buyers is finding on at any price level they can afford. I’m sure you’re finding the rental housing and condo buying situation very difficult and you may find Surrey, Richmond, and Langley your best bets.

Zolo in its most recent report shows the price of a 1 bedroom condo in Vancouver has risen $17,000 since July, while 2 bedrooms are $39,000, and 3 bedrooms have risen $100,000. These condo prices are still well down from one year. So condo prices haven’t recovered from the deep real estate recession of 2017/2019.

Zolo further reports sold condos are up 32% while active listing dropped to 1754 which is down 4% from last year. The sales to listing ratio is 96%.  3 bedroom condos are in greater supply as new listings grew 4% and active listings rose 23% YoY.

Zolo says Richmond has had the highest price growth at 11.8%, while Maple Ridge and Langley prices climbed by about 6% YoY.

Will new builds save the day for 2020? BC housing’s chart shows construction during the past 2 years is significantly less which tells us fewer condo releases are in the works. Metro Vancouver is where 73% of all new homes were registered in October. Richmond (1,447), Burnaby (742) and Vancouver (560) and Langley 231 were the top three cities for new multifamily units. For other towns, it’s going to be tight condo market conditions. 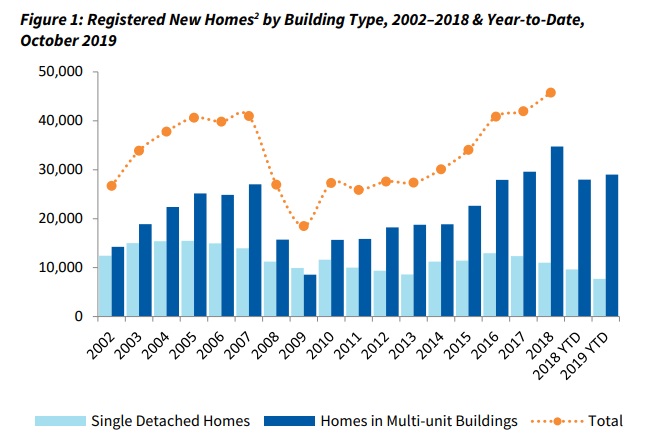 New Home Construction in BC – Chart courtesy of bchousing.org

There’s been a lot of talk about housing market crashes in Vancouver, but wishful thinking might what’s behind it.  Experts have been forecasting  housing market crash across North America would be in a crash or deep decline, but it hasn’t happened. Given the strength of the North American economy and the likely of good trade negotiation between China and the US, the US housing market forecast looks promising. However, Vancouver and BC, is not the USA.

How Do the Forecasts Look?

With the economy faring better, most forecasters may even upgrade their 2020 forecast for Toronto housing and the Toronto Condo market forecast, along with the Vancouver region forecast which are the only housing markets doing well.  The rest of the country is hanging on with spillover from the big cities.

When the foreign buyers tax was implemented in BC and Toronto, I suggested that instead, incentives should be provided to property investors and builders to build in areas outside of Vancouver and Toronto. Unrealistic? Long term, it benefits everyone.  These housing shortages including student housing shortages are significant economic and personal issues. It could end in a crash.

Crisis for Condo Renters in Vancouver

The situation for many renters is definitely a crisis. There is an exaggerated need for rental properties and housing for students.  One estimate is there are more than 24,o00 families in need of housing in Vancouver and many of them may involve students studying in colleges in Richmond.

Recently 300 buyers showed up to apply for a few coop units up for sale.  If new builds decline because of a fear of rent controls and then Canadian interest rates rise, this could make the forecast gloomy.  Vancouver residents need to get more active and encourage local politicians to adopt a new attitude toward the crisis.

A new socialist driven research project called Cambie Corridor is being conducted to see if a restriction on development to force lower rents will work. In a few years, we’ll have data, but in the meantime, why would the condominium builders not just stop building in Vancouver?

Builders need incentives, where that is just a money losing proposition. They can’t create $850 a month apartments in Vancouver’s pricey atmosphere.

There’s a lot of belief in magic in some government quarters but the current crisis shows how badly mismanaged housing in Vancouver is.

The city awash in beautiful condo buildings however the units are out of reach of most buyers. One could ask who the builders are building for if few are able to finance them?  New government housing projects could create coop affordable units, but would they turn into another LA styled Watts neighbourhood, with crime and malaise?

Now we understand the wish for a Vancouver housing market crash.

Failing Governments in BC and Ontario Need Ideas

The previous BC government failed badly in using old school tactics to solve an International level challenge.  Rightfully, they were ousted, and now we’ll see if the NDP can actually deliver on their promise to lower income buyers and renters. Supply must be increased in Vancouver as the city just gets more popular.

And for most homebuyers in the Vancouver area, detached houses aren’t even a thought since the average price has hit  $1,617,300 which is up almost 3% since last year.  Condo hunters will have to be more persistent, patient and creative to land a condo to call home.

A solution that may support increasing availability is to open up land for development outside of Vancouver up the coast and out on Vancouver Island, or into the interior. With Federal and BC government incentives and tax support for this (take it from the foreign buyers levy — $ billions of dollar tax grab for what purpose?.   This could be used to draw businesses out into new outlying communities.

Many businesses don’t actually need to be in Vancouver. If they had an opportunity to move somewhere cheaper, they’d do it. They’d get away from the congestion too. People want to live near the jobs, thus moving  the jobs outward will take the pressure off and open up amazing new cities across BC.  Places like the Comox Valley and Sunshine Coast and Nanaimo would welcome the growth.