What Will Google Look Like after it is Broken Up?

Forecast:  Google will be broken up. Why? It’s the only viable solution to stop a Trillion dollar company from dominating everything it wants, undermining small business and competition, because it can.

But don’t feel sorry for Google. The founders got to live their dream and get ridiculously rich.  As the pieces are sold off, shareholders could see greater value.

However, Google’s pieces thrive because of the money pipeline from Google search. See more on Google’s stock price and other stock market predictions. Brin and Page will be able to take their remaining businesses to new places and with a big flush of money, those businesses could do well.

When that disappears, these fanciful companies Google owns will have to compete on their own. They will learn firsthand what monopoly means.

If the investigation and upcoming antitrust charges against Google from the United States Attorneys General and the US department aren’t enough, other plaintiffs are launching their own lawsuits against Google for unfair practices or breach of trust.

The flurry of charges will create a record setting legal defense cost for Google as companies line up to punish the company for its monopoly behavior.

The latest suit filed in California courts ($5 Billion class action suit) is regarding Google’s browser incognito mode. It seems it does allow tracking of users who believed their search activity was completely private.

This new case suggests that Google’s incognito browser mode wasn’t really incognito, and a big company with a lot of lawyers would have known this, and should not have called it incognito. That is misleading. Companies have to careful of misleading branding, and it looks like Google wasn’t.

That case is simple.  The more serious issues are building a supercell thunderstorm over the summer of 2020.

How Will the Economy Change without Tech Giants?

If the tech giants take a fall, the IT and retail landscape will change.  New tech stocks will grab investors attention.  I’m creating a number of posts on this very important topic, because if Google (and Amazon and Facebook) are broken up, it will create the greatest opportunity for tech companies in the last 20 years.

The biggest drama revolves around how Google (and Facebook and Amazon) will evade the charges. My belief is that they can’t. They’re victims of their own success and they must be taken down. It’s the only way we can open a fair, competitive market now dominated by digital technology.

You might be thinking these companies don’t really pose a threat to the economy. Yet, it’s the nature of digital technology that one company with a lot of money and pivotal resources (Google search and Cloud data) could take over everything.

For consumers it might not matter, but for small businesses who have been squeezed out the last 8 years, ad prices are very high.  When a company earns hundreds of billions, claims free market bidding, yet also imposes minimum bid prices on ads, you know something’s not right.

At what point in that journey do we intervene? The crisis right now, is that small businesses which are built on interpersonal transactions are at risk of disappearing. At least current businesses are. Certainly, new companies could pick up the pieces of the disaster.

But if you’re a small business person, you know how slim the pickings are. It’s incredibly tough to survive as an independent business operator now. Yet the big companies thrive, which is why the stock market forecast is so good.
They thrive for a variety of reasons, and mostly because they don’t rely on person to person retail sales.

The government faces the specter of a small business holocaust, if a Corona Virus vaccine isn’t developed soon. The recent rise in Covid 19 infections warns of how persistent this small business

Google, Facebook and Amazon may have benefited from old definitions of monopoly written a hundred years ago. Those definitions obviously couldn’t have been designed to address the dancing capabilities of modern corporations in a digital landscape.

Google Alphabet likely won’t escape anti trust and monopoly charges on legal technicalities now because regulators don’t want to let them get away with it. In the courts, it does come down to whether the authorities are willing to let it go.

However, can you charge Google if you can’t prove what’s going on inside their blackbox technologies? Investigators might sidestep that issue by simply looking at outcomes, rather than digging into Google private company data and programming to prove intent.

When you look at the outcomes, you know what must have been in the blackbox technology.

Google is an Advertising Platform

Google has changed over the decades, going from an ad shunning public search engine to a juggernaut global advertising platform. And if you’ve Searched on Google, you can see how they push the stuff you really want way down the page where you have to click and scroll to get to it. That’s a big pain for users.

Google responds to anti-trust/monopoly charges by saying consumers get faster service and cheaper prices because of them.

Here’s a great example of the ethics of Google as they introduced a “featured snippets” section years ago, which meant users didn’t have to click through to the content provider’s website. It means they get no visitors and no customer revenue. 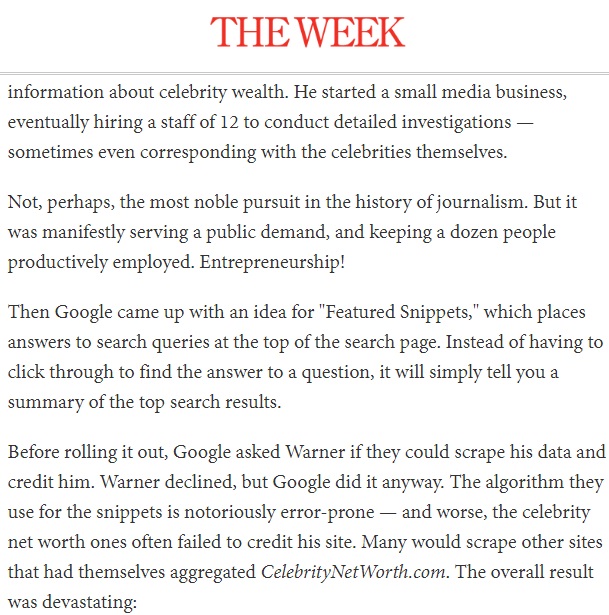 Screenshot courtesy of the theWeek.comA lawyer could certainly claim intellectual property theft and copyright theft. But as Google has a monopoly, there are no further options for the publisher.

Are Publishers Fairly Compensated by the Monopoly?

If you’re not earning much on Google Adsense, there’s a number of reasons why.

⦁ First, Google controls payout rates through an algorithm which it controls and justifies to no one.
⦁ Google controls the search results algorithm which may be skewed to favor other publishers — corporations with pseudo-credibility (EAT algorithm).
⦁ Google may be planning to sell Adsense in lieu of the fact that the sites which contain Google ads aren’t seeing as much traffic anymore.
⦁ new rival ad networks may be grabbing up more ad space leaving less opportunity for Google
⦁ Google is facing huge legal bills as it faces a huge fines or potential breakup of the company late this fall

Won’t Publishers and Small Businesses Suffer if this Happens?

Is there a silver lining for publishers and ad companies who depend on Google? There will be a transition period that’s for sure.

Remember that Google Adsense is an easy to join Ad network. Other ad networks require up to a million visitors per month to join. They will reject your application. That’s definitely a pain, so hopefully new ad networks will evolve to serve the small publisher market. It’s a market with no competition so what would you expect?

It’s not a fair market obviously with only a few players. It’s skewed badly due to the long standing Facebook and Google monopoly. Getting it back to a naturally competitive marketplace might take a while.

Some reports suggested ad rates for advertisers would be higher without Google. That assumption seems ridiculous given Google Ads requires minimum bids on some keyword phrases, when advertisers wouldn’t normally bid such high prices. And new competition itself among new networks and publishers would tend to cause ad prices to fall.
Only monopolies can keep prices artificially inflated.

For good sites with good content, advertisers will bid more which could be very good for publishers. In turn, these higher ad payout rates would support development of good internet content. Content is expensive to create, and Google adsense doesn’t pay enough.

Google doesn’t kill a business directly. It buys another company in the industry, feeds it huge amounts of cash, and that company then kills the other businesses. Traditionally, this is how monopolies grow and run right over competitive threats. So ruthless.

Like Amazon and Facebook, Google is amoral. It only knows its hunger for unlimited conquest. It’s hunger and self-license give it permission to do these things.

What Will Happen if the Charges Stick and They’re Convicted?

Regulators are increasingly looking at history, and history shows that big fines don’t work.  It’s a pittance compared to their yearly earnings. These megalithic companies just reorganize and get back to where they were.

Google has to be broken up. It’s the only action that will eliminate the threat and bring competition back.

Regulators are looking at Google’s monopoly on online advertising, but the real issue is the 90% monopoly on search engine usage. Due to its dominance in that service, they can force advertisers to pay more to access the Google network and appear in search results. That is clearly not fair.

We’ve all seen some (smaller publishers/companies) squeezed out of the search results top ten, in which case they can only advertise to be seen. Google controls the search indexing algorithm and it can favor some while eliminating others.

And the algorithm is so extreme, it may be impossible for some sites to be seen, even if they have good, credible, fresh content for readers.

The Search Engine is the Core of the Empire

Google’s search engine must finally be broken up too. It’s the seat of the empire.

And what about the other units? Well, the could be sold by Alphabet, as Alphabet is disbanded itself. Or Alphabet may be allowed to continue these ventures. Without the money pipeline, it’s not certain if any of them are viable. 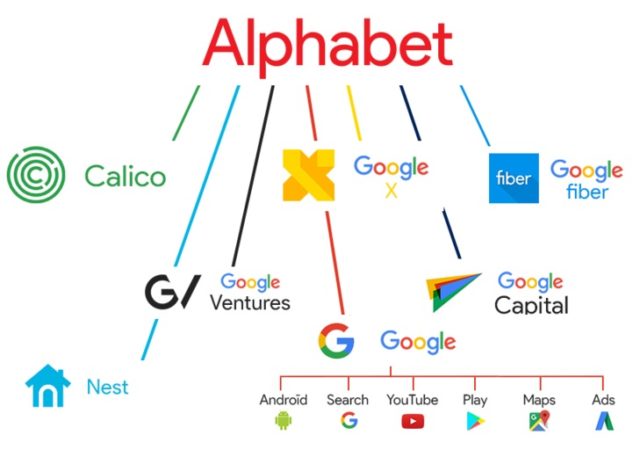 Google is a monopoly and there will be almost no way the lawyers can prove it isn’t. 90% is a tough number to hide. The cries of those who have been wronged are piling up and they will be heard in court. They come from every industry and involve every occupation and type of business.

The harm to consumers isn’t an issue, the harm is to US businesses who are struggling to survive and reach 2021.

With Google in the way, small business doesn’t stand a chance to survive. Either they remove Google (and Facebook and Amazon) or the economy could crash.