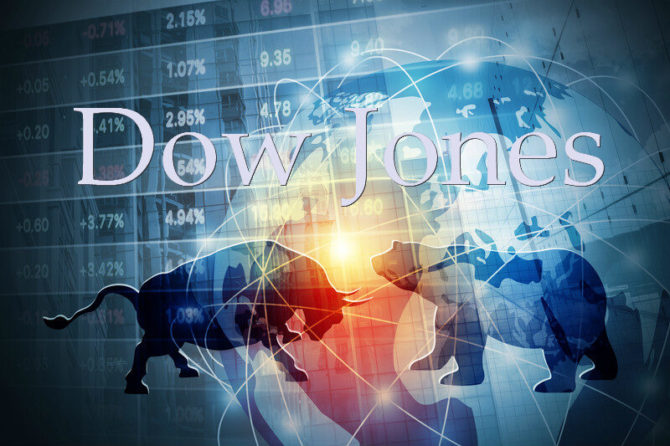 You’d think US industrial stocks would have the most favorable outlook as the pandemic recession begins to close. Yet, the US economy has some challenges ahead.

Most experts suggest the Dow Jones is at its peak right now.  Given the tech sector is hot right now, investors might want to check them out.  That will particularly so,  for small tech companies on the S&P and Russell which could benefit from anti-trust measures if they’re enacted on Google, Apple, Amazon, and Facebook.

Forecast for March and Next 6 Months

The DOW Jones forecast for March and for the next 6 months has to be rosy.  Commodity prices are rising, the economy is expected to get rolling, and international trade should begin to rev up too.

The Dow Jones index along with the S&P, Russell, and NASDAQ are hot this week to open starting today March 1st.  The Dow jumped up 603 points.  It seemed to be driven by the stimulus package vote and the J&J vaccine news. Barrons says it is partly due to lower bond yields which makes equities look more inviting.

Dow stocks are highly dependent on China trade and yet China US relations are not secure by any means given China’s military actions.

This month it is technology stocks that are driving the markets, and APPL is one of those stocks. It could be the fear of a second wave isn’t as intense although new cases are rising across the US.

Dow Jones Outlook for Next 6 Months?

As I said last summer, given the size and complexity of manufacturing and materials logistics, the companies on the DOW 30 will need some time to ramp up after the Covid 19 Shutdown. That pushes the horizon off to about 6 months before profitability returns.

And as forecasted as well, with global economies recovering, interest rates low, and a booming latent demand for housing, travel, consumer goods, US industrial production should ramp up fast with inflation greasing the wheels. Shortages of all goods will happen worse than it is now over the next 3 to 6 months and that demand will spawn new production.

Forecast.org believes the Dow Jones will fall to about the 30500 level by October 2021.

What Factors Drive the DJIA Price?

As a weighted index of only 30 stocks, some might question whether the DJIA is a relevant index.

Dow Jones 30 Stocks include Apple, Pfizer, Walmart, Johnson & Johnson, Walt Disney, Nike among other huge corporations. Calling them industrials is a little misleading. Transportation and utilities stocks are not included in the DJIA and instead are in the Dow Jones Transportation Average (DJTA). 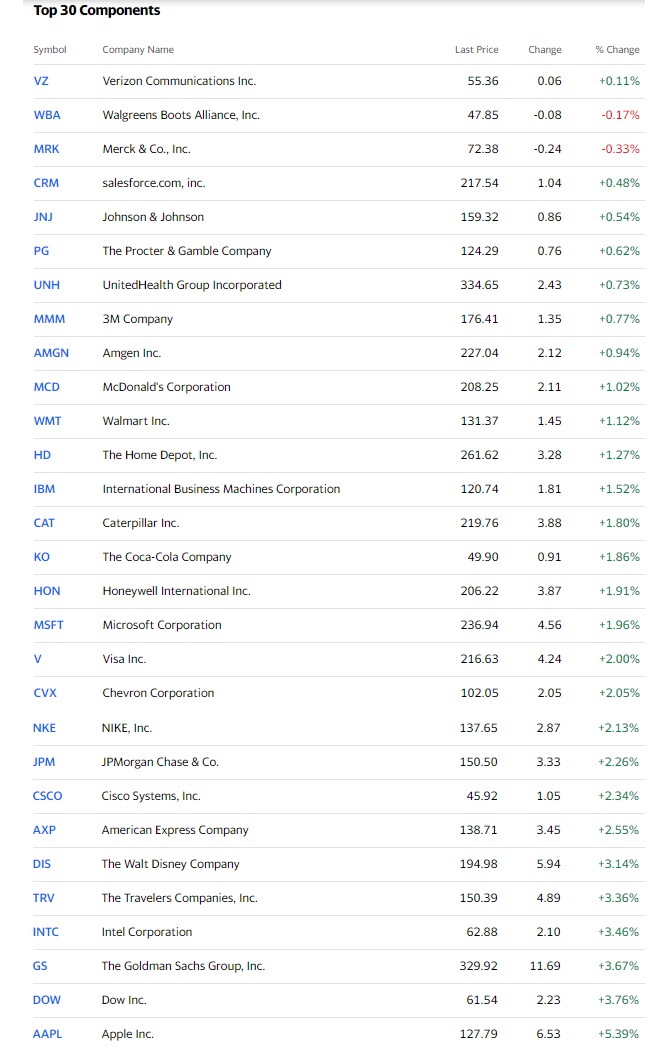 Whereas the Dow Jones average is a measure of the biggest companies, the S&P 500 index is more about the stock prices of big, but healthy companies — those with high market cap above $8.2 billion and a public float of 50%, and which have had positive earnings for the last 4 quarters. The S&P has 500 stocks which makes it a more reliable reflection of the stock market.

The Russell Index in contrast is a measure of 2000 small cap stocks. It provides a look at performance of small business in America.

Like the S&P, the Dow Jones index and forecast correlate to the US economy. When GDP rises, it reflects manufacturing, consumer spending, vacations, and other consumption spending and DJIA companies are usually involved heavily in that activity.

Each of the DJIA companies come from different sectors so it reflects earnings performance plus employment outlooks.

2020 Forecast for The DOW (Trading Economics)

Large institutional investors (i.e. hedge funds and mutual funds) invest heavily in these blue chips as a safe long term investment.  These are big companies who hold monopoly market dominance. If anti-trust and anti-monopoly sentiments rise, these companies stand to be hit hardest (FAANGS). Some big name tech stocks however are not in the Dow.  Check the latest Google Stock price, Tesla Stock price, and Amazon stock price predictions.

The 30 DJIA stocks by themselves offer a very skewed perspective of US stock markets and the economy as a whole.  See the 2021 stock market forecast for more perspective. In fact, many of these companies operate globally, and are therefore outside the real US economy, deeply affected by International trade deals.

Here are the Current 30 DJIA Stocks:

Longforecast.com’s adjusted outlook to 2022 sees the Dow Reaching 34000 over the next 2 years. 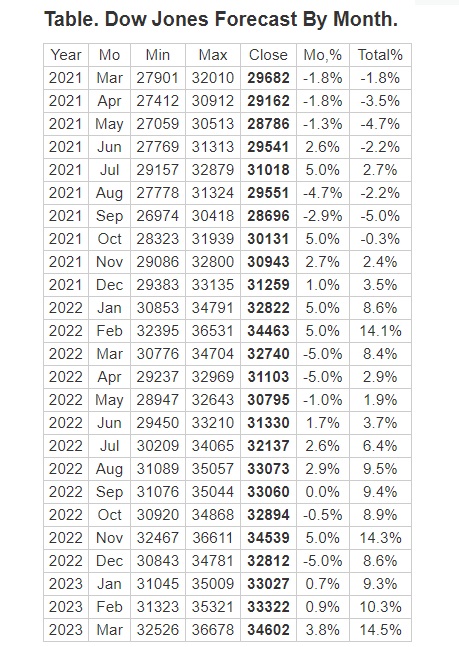 Dow Jones volatility is mimics the same path the prices and forecasts for the S&P or the NASDAQ. DJIA are all about political power and the primacy of the monopolies. Within Free Trade, the monopolies could do as they pleased and name their price. But the end of Free Trade and the enforcement of China tariffs has ended it.

The threat of data privacy legislation and punishment from Europe, Asia, and North American governments casts a shadow over Dow companies. Anti-monopoly action by the DOJ too threatens these big companies revenue picture.

When President Trump was elected, the Dow Jones average rocketed higher as the chart shows. However, Trump was not about to support the profits of big multinationals who merely treated the US as their retail outlet. His campaign promise was to make America Great, drain the swamp, and grow the US economy.

The tariffs which Trump has imposed had the biggest impact on the NYSE Dow listed, big industrial stocks which primarily use cheap foreign labor to sell in advanced economies such as Europe and North America.

This makes predictions of DJIA company stock prices a little bleak. Moving production and fulfillment channels is not an easy thing to do. Further many CEOs beleive political opposition to change will mean President Trump won’t be successful. They believe the status quo resistance globally will force things back to the pre-2016 conditions. They likely feel the turbulence and volatility of this big change will make voters turn against him.

If President Trump loses the election, it would mean a rapid sell off of US stocks and stock market crashes, as investors money flees the country. The 2020 recession or slowdown, could potential mean a real stock market crash, and the Dow industrials would be hit hard. It’s impossible to predict what will happen in the aftermath because the democrats don’t even have a leader yet. After frantically criticizing Trump for everything he did, they would likely have to pick up his ball and run with it.

As Trump persists in the Tariffs and production repatriation to the US, CEOs will be forced to begin building production facilities in the US. When this happens, a massive reinvestment in US companies will result which will improve consumer sentiment, growing retail spending too. But it’s a process that hasn’t begun yet. Until all hope of keeping China production is extinguished, the stock markets will be volatile.

Common sense, new government spending limits, and a $500 billion yearly trade deficit is something even the Democrats can’t sweep under the carpet. With protectionism sweeping the world, smaller US companies are likely to find themselves more competitive and agile, and able to get off the ground. Look for those companies who are willing to create US-based supply chains to do really well in 2020 and beyond. US stocks have the brightest outlooks. see out best stocks to buy for 2020.

Keep in mind that monopoly companies such as Amazon, Google, Sony, Microsoft, and Apple can crush any small to mid cap threats to their dominance. Utility companies in electric, transport, pharmaceuticals, and telecommunications are positioned best to benefit from the US economic forecast.

The most recent round of tariffs imposed September 1st means blue chip companies that import products or parts into the US must bring production back to the US. The Dow Jones average has been resilient however, despite the threat to their cheap labor sources. While some threaten to move production to Vietnam, India, or Mexico, it’s only a temporary evasion of taxes. Inevitably, production must return to the US.

Is it wise to invest in Dow Jones stocks? Likely not. It’s wiser to look at top performing US stocks on the S&P, or small caps on the Russell Index. The NASDAQ index as well holds stocks with better upside, given technology won’t fail even during a recession. Those companies using AI (artificial intelligence) should be of particular interest to you.