The irony of it all. BC is now Canada’s economic darling and yet some are complaining (justifiably, those who can’t pay the high rents). The question is whether politicians will try do something negative to spoil this growth.

The BC economy is expected to expand nicely at 2.9% to 3.1% next year. BC exports are growing as new liberal international trade deals are increased and as our loonie keeps falling to .75US.

CMHC believes there will be 30,000 more households in BC next year, and that will support sales of rising new homes being built. Mortgage and borrowing rates will stay low, energy prices will stay low so it’s a superb business situation for BC companies who need the investment money. 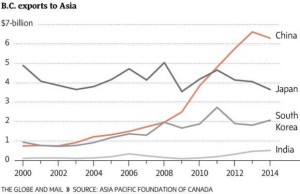 Exports to China strong. Growing trade will make Vancouver the key city in Canada in the next 5 years.

BC’s latest jobs report is pretty good too. BC is leading the country with 12,400 jobs added, while the rest of Canada lost jobs. And 2016 has a nice look to it — supporting a healthy real estate sector.

The big controversy is the influx of Chinese investment money into the BC commercial and residential real estate sector. If the Asian markets continue sliding, more rich Chinese will be seeking to park their money in Vancouver, Kelowna, Calgary, and Toronto property. This is a short term financial anomaly that won’t continue so why bother trying to kill it?

A Better way to Manage the Influx of Billions 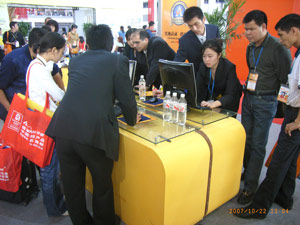 There are those who want to end the infusion of investment from Chinese property buyers.

Rather than making these investors use devious ways to buy property here, we could make it easier for them to buy in the Okanagan, Calgary, Edmonton, Regina and Toronto tax-free, since this investment money could go elsewhere instead. We could lose it all.

If Asian buyers can’t buy here, they will choose the US to park their cash. San Diego, Los Angeles, Seattle, Miami and New York are very attractive too. But Vancouver’s better.

A report in the Globe and Mail states:

Another Globe and mail report suggests Chinese sales are aided by a tax loophole that allows them to avoid tax by listing the purchase in the name of a relative.  33% of all these purchases are bought under these circumstances. If this loophole is closed, it could send a shockwave through the real estate market.

The G&M report also revealed that number of listings in Vancouver has dropped 27% from last year.