There are few things more moving emotionally than good music, however music comes in many different forms. It’s time to explore a genre you may have never known existed. I’ve always had a preference for electronic music going back to the Edgar Winter band. Music technology has come a long way, and I’m sure the old guys are thinking about what they could have done with today’s technology.  The most popular electronic music is progressive house, trance, and Dubstep.

I’m fascinated with new types of electronic music and the fact that one or two people can create such complex moving rhythms and complete songs using a computer.  But, of course, it’s not just sounds. This type of computer-generated music represents cultural changes just as the British invasion, rock music, disco, and country music represented cultural shifts in the past.

Now, if you’re old, you won’t like this music called Dubstep. Just warning you. But, it’s already working itself into progressive house songs so when it’s used in moderation, it can make some songs very dramatic. I really like the energy of this music.

Dubstep is a new genre within electronic dance music. [My note: you can’t really dance to dubstep, unless you’re Elaine from Seinfeld]. The best way to recognize a dubstep track or mix is by the reverberating sub-bass that is present in most productions. The sub-bass is reverberated at different speeds to give a sense of movement and insistence. Dubstep originated from dub remixes of 2-step garage that was taking over London at the time. Remixers attempted to introduce new sounds into the 2-step genre, resulting in a sound that would soon require its own name. Dubstep, the word, is simply the combination of “dub” and “2-step.”

The younger generations are really into this stuff, probably playing it in their cars or during video games. It makes good iPod music for mountain biking and maybe skate boarding too because of the sudden dramatic changes in tempo, rhythm, beat and uses what they call drops. Chillstep is just the slower, more laid back version of Dubstep.

Dubstep is sort of like a Grizzly Bear with a machine gun surfing on a great white shark on a major wave while the sun is shining above. 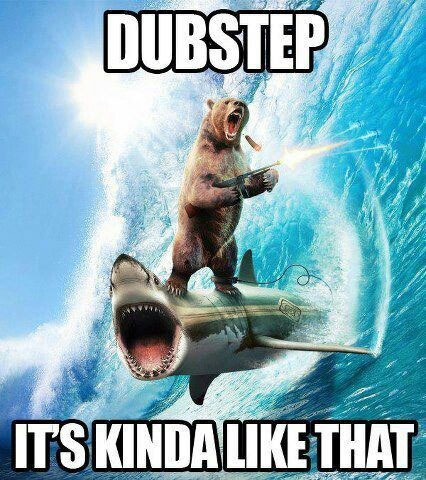 I love the raw energy of Dubstep. Disruptive, surprising, hard to ignore, stirring, and makes you want to be active and physical.

Adventure Club – Excellent, rich Dubstep-infused Technobass!  Part of this song was used in a Pepsi commercial.

I like the stereo separation in this track. You don’t hear stereo too much anymore, so maybe the Dubstep guys are aware of the power of the stereophonic experience. It’s a great way to play with the listener’s brain and move the music around in their mind. Why stereo has been abandoned is one big mystery to me. Stereo is better. They used to have quadraphonic! They could make the music swirl around you like a vortex. That was neat.

Wait. They don’t love you like I love you. Wait. Words are neat, but words can’t keep up.

Cadence by Adoxe:  “Incredible immersive with lush, ambient pads and melodies that drift like a gently flowing stream, Cadence replicates the tranquility and peacefulness of nature in a way that very little digitally composed music even attempts. Organic-feeling, and yet extraordinarily tight and precise, Adoxe has created a chillstep gem.”

Crave You by Flight Facilities, an Australian indie band. Vocals by Giselle. Want to hear the original song/video? Go ahead compare them. You’ll like both.

This song is really aggressive, perfect for mountain biking videos.