The much rumored housing bubble in Dallas is very likely to burst this spring. Houston, Fort Worth, and Dallas are getting hit hard economically with a combined Corona Virus Shutdown and a plummeting price of oil.

The new forecast is for falling housing prices, pressure on the Texas banking industry, with a return of normalcy in the 2nd half. Of course this depends on OPEC oil pricing decisions. It’s unlikely OPEC can sustain high production amidst much lower demand. However, expert predictions are all over the place from 10% to 30% losses.

Only a couple of months ago, Zillow reported Texas real estate as the most valuable. They report that Texas’ housing market grew $89 billion during 2019. That compared to California, at $77 billion, and at Florida ($69 billion). Dallas Fort Worth contributed $23 billion of the total increase. The DFW is the top-valued housing market in Texas at $589 billion.

The top questions people are asking are: will the Dallas market crash, and are housing prices falling?  Buyers are hoping for some big bargains while mortgaged homeowners are nervously assessing their future.

Could experts have foreseen this event if they had been watching the Saudi’s financial position and mood? Could they have seen that another virus from China would get out of control and create a global pandemic? Only very aware forecasters would have been open to looking. They do not appear in the official watchlists.

And NAR, only 3 months ago rated Dallas as having one of the best outlooks of any housing market. Lawrence Yun cited strong in-migration, high employment, and lower housing prices as key factors.

Shockingly, in a short period of time, all the housing market forecasts for Dallas and Fort Worth have been discredited. In fact, the mood is moving toward thoughts of housing market crashes across the nation.

Oil Prices Rocket Down to $20 a Barrel

The Texas oil based economy can’t work on a $20 a barrel price. Even at $40, there was trouble (ended Friday at $23 a barrel).  the Saudis and Russians are locked in a serious standoff with each other. Their true aim is to kill off shale oil production in Montana and California along with the Alberta oil sands if possible. Alberta heavy crude oil for instance was selling for $7 a barrel.

The timing of their oil production flood comes at the perfect time to hurt the US economy and its surging oil industry hard. And when the US is down and out, OPEC could land another heavy blow by cutting production and steeply raising prices.

$3 a Barrel is Not out of the Question

According to a report last year in the Dallas Morning News, homeowners in Dallas Fort / Worth owed $194,710 in mortgage debt.  That compares to the average home sales price then in North Texas of $337,024. This is less than half of what California homeowners owe, but California isn’t getting hit as hard by ultra low oil prices. In fact, low gasoline prices will be a welcome benefit for Californians. What modifies the dour outlook for the Dallas housing market was higher home prices and lots of mortgage debt. Now with the threat of extended unemployment from low oil prices and a subdued US economy overall, there’s not much to support home prices in Dallas, Fort Worth or Houston.

It could be the euphoria driving the housing markets across the US from California to Florida to New York is done for now. And in places like Montana, Texas, Alberta, Canada, it’s an actual housing market crash.

Only a short while ago, Redfin rated Texas cities a most vulnerable to a housing crash. Austin, San Antonio, Dallas, and others. Redfin believed that a recession wouldn’t bring down the full US housing market, but given $40 oil prices, they likely felt Texas was a zone of vulnerability. At $10 a barrel, where it’s headed, all Texas cities are vulnerable.

Redfin’s Evaluation of Markets at Risk

Redfin’s study included rating a number of US cities based on these factors:

Basically, they studied factors relatively independent of the the impact of low oil prices and other energy demand trends. Interestingly, cities such as San Diego, Los Angeles, Riverside, and Miami have much higher home price to income rations, but their economies aren’t dependent on oil.

Florida’s housing market however with its crashed tourism industry is in deep trouble now too.

A few are suggesting the housing crash will last a lot longer than this v shaped recession. Another factor is fear and hype which was focused on the stock market. Now with mortgage payment defaults and lost jobs, it could turn into a housing market contagion. As economic conditions worsen, many buyer’s DTI (debt-to-income ratio) will suffer and they may not qualify for a purchase any longer. They may have to use the downpayment money they had to pay their rent.

In the Redfin report, one expert suggested there is no housing bubble because supply is low.

“Home prices are high right now, but they’re high because there’s not enough supply to meet demand, which means there’s not a bubble at risk of bursting,” said Redfin chief economist Daryl Fairweather. “

They couldn’t conceive that demand would disappear so suddenly based on OPEC and the Corona Virus, then return perhaps much weaker than it was in the fall. 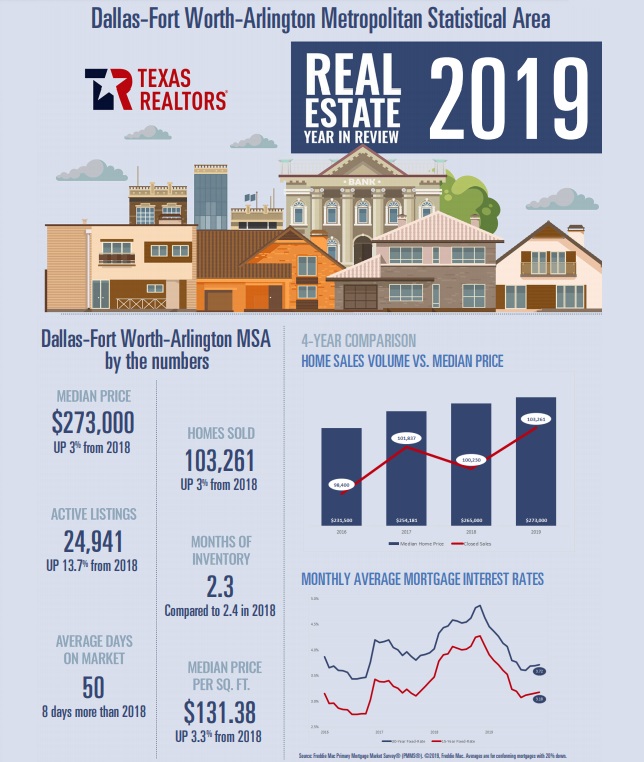 The region enjoyed strong immigration of new residents which fed the demand for housing and for rental apartments. Apartment rents have risen about 10% each of the last 4 years. Many renters were eager to become home owners. Zillow was forecasting a 5.3% increase in home prices over the next year. They state that 5.7% of homes have negative equity, and 1.3% are delinquent on their mortgages. Zillow rent index shows average price of $1587 a month, a steep rise during 2019. There is no way to forecast the Dallas Fort Worth real estate market over the next 5 years. The key factor is OPEC and the political mood of the times.  It would appear OPEC has the US right where they want them. However, Saudi Arabia will be severely economically damaged if they persist with production floods.