Canada’s current Prime Minister Justin Trudeau made the decision to hold a Federal election during a 4th wave of the Covid 19 pandemic. It’s a strategy that may work because voters are voting for social programs, not candidates.

A few days now before the election, it is neck and neck between the Conservatives and the Liberals. It looks like it might be no change at all, which makes the $600 million cost of the election a big waste hard earned tax payer dollars.

Will Trudeau be able to hold onto office after fumbling relations with China and the US, failing to support Alberta and Saskatchewan oil exports, and creating more burden for Canadian small business owners?

Politicians and Canadians both are scratching their heads at why an election is such a priority right now? In fact, a Nanos survey showed 75% of respondents felt an election isn’t necessary right now, regardless of the pandemic. In the debates happening right now Trudeua was grilled directly over many issues.

However, even though Trudeau has done little to ease the housing crisis and lower home prices, can we believe Otoole’s promise of 1.4 million houses soon? Canada’s Federal election mirrors US elections in that issues don’t matter at all. What does matter is maximum immigration from unqualified sources, and maximum spending. The conservatives could have promised big spending and made the Liberals irrelevant, yet they wouldn’t do it.  This is a big tactical error on the part of the Conservatives who have a winnable election in front of them.

So far, the Canadian media has decided to stay quiet on the issue of the election reason, but the matter will plague the Liberals right up to September 20th. And if even 5% of former liberal voters switch their vote to the Conservatives, it would be enough to form a new Conservative government in Canada.

Yet, with insufficient freebie money and program giveaways from the Conservative, the voters in the inner cities of Vancouver, Toronto and Montreal will simply vote again for Trudeau and the Liberals.  I initially thought the Conservatives had a shot at this, but the attacks on Trudeau, along with no cash giveaways, means Metro voters likely will stick with Trudeau.

For small business owners, and for those who want a pro-business environment, and see taxes controlled, a new Canadian government would be a breath of fresh air. After the US pushed Canada away with the North American Free Trade agreement, Canada’s international trade health is under question. Access to the US is tougher now.

In particular, this country’s ability to export lumber, minerals, natural gas, and oil has been hampered, and Canada must sell natural resources to support its economy and for the Liberals to keep spending.

Here’s something to think about too:  If Cryptocurrency becomes a business currency, will Canada lose its advantage with a  cheap loonie to stay competitive?

The Conservative Party is focusing on the future, which is Trudeau’s weakness oddly enough. They’ve drawn up their plan entitled “Secure the Future” which responds to Canadian’s insecurity about their economic future. As you know Canada’s relationship with the US and China has soured and our export markets are a business problem, not ideological. 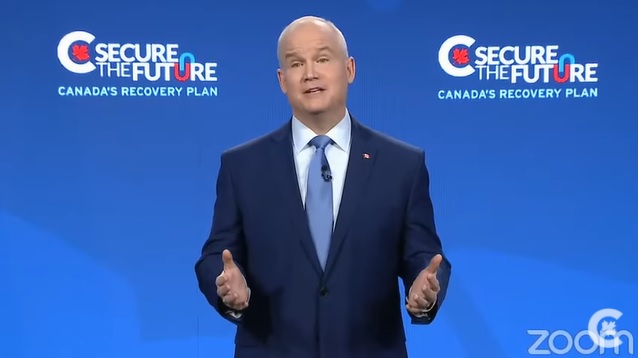 Canadians More Concerned with their Own Fate

With the Covid 19 pandemic, PM Trudeau was able to spend enormous amounts of money without complaint from Canadians, since it was an emergency situation.  The Liberal government is known for a redistribution approach to wealth, not to support the production of new wealth.

And with the economy flagging, the economy and entrepreneurs and small business owners need financial help and a pro-business government as businesses struggle to survive during this continuing pandemic. Trudeau will be under pressure until September 20 regarding the economy, further helping us understand the real reasons for the snap election.

“Canada’s economy is getting worse, not better,” Conservative leader Erin O’Toole said from his Ottawa headquarters. “Under Justin Trudeau we are heading further down the road of recession, not the road to recovery.” Canada’s economy shrank 1.1% in the second quarter on an annualized basis, missing analyst expectations of a gain of 2.5%, Statistics Canada data showed.

Early in the pandemic, Trudeau showed his weakness. New supplies of much needed facial masks, N95 masks were offered to Canada and turned down.  This was at a time when his Health officer Theresa Tam said Covid 19 was not airborne but transferred via surfaces, and that masks were not a priority. There were many calls for her resignation but Trudeau failed to act.

I remember using paper towels as a Covid mask, after all masks in stores were bought up and sent to other countries (family members of new Canadians).  It seems some Canadians knew what was coming, but Justin Trudeau seemed to not know. He did not reverse the decision to accept the masks, much to the disbelief of the company offering them. Trudeau knew this and did nothing.

PM Trudeau is known for his lavish giveaways to foreign countries, but he hasn’t lavished his own people.  In fact, he has made issues of aboriginal rights, feminism, and climate change, while not protecting Canadians from huge, predatory corporations.  His strategy of drawing in millions of immigrants from inappropriate countries is well known, and he continues to draw them when there is no housing available for them and education and medical services are ultra-expensive.

The Toronto housing market and Vancouver housing market have been suffering for a decade now, and no support or leadership from Trudeau on housing has happened. Recently he announced billions for a 10 year program of building apartment buildings, but it’s too little too late. Housing is a national issue, with all cities suffering (i.e., Toronto and Vancouver), and shortages and oppressive prices reaching smaller towns in Northern regions. The Canadian housing market crisis is real, and Trudeau hasn’t addressed it all.

These facts will be played up by the PC and NDP parties because these are real pains suffered by real Canadians. This is not ideology.  Since climate change is a global problem, a Canadian prime minister has very little ability to affect it at all.

The economy was recovering, the provinces have done their best to contain the virus and deliver exceptional medical care to Canadians stricken with the Covid Delta strain.  If anything, it is the failures of the Trudeau government that have left Canada unable to help Canada’s energy sector, generate more affordable housing supply, and build good relations with the United States.

Neo-Liberal Ideology is Crippling the Country

The neo-liberalism destroying the US has infected quite a few countries, including Canada. And with climate issues such as Fires, droughts, floods, hurricanes happening, it’s been easy for liberals to hide in the neo-liberal fog. But the tide is changing as more Canadians face homelessness, joblessness, and rising consumer prices.  The rise of the Conservatives is just the changing tide of priorities to practicality. And the media may be tiring of pushing the neo-liberal trash out to Canadians, a story that’s become stale and ridiculous.

The reason for the snap election, well ahead of when it was supposed to be held in 2024, is because Justin Trudeau and his liberal MPs are fading in popularity. He believed he must have the election now, because the data says his fortunes will wane every month from now on. He’s hoping he can pull out sneaky, snap election.

Polls suggested voters are apathetic, compliant, and believe Trudeau is the only one for the Prime Minister role. But the scripted, old fashioned rhetorical speaker looked very uneasy in the 1st election debates a few nights ago. The Conservative’s Erin O’toole and the Bloc Quebecois’ Yves-François Blanchet came out strong that evening.

The Neo-liberal driven Trudeau has lost face already, as these poll charts below show the Conservatives are rocketing in popularity. With Trudeau resting on typical neo-liberal smoke screen ideological themes such as climate change, it is the rising price of gasoline, food, home prices, and lack of housing supply that will make Canadian voters look to a new government to take us into the next 4 years.

These charts show the PC party’s growth and how projections have them in the driver’s seat right now. 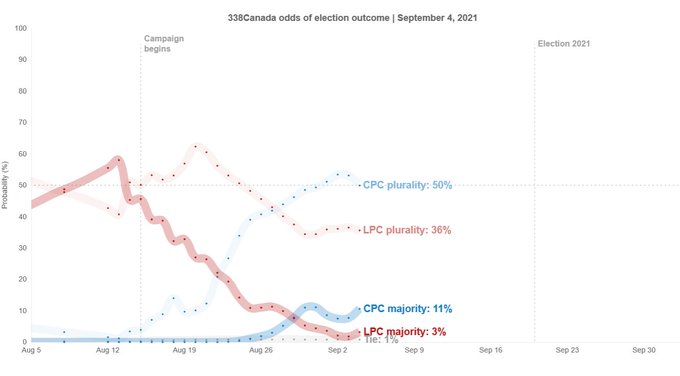 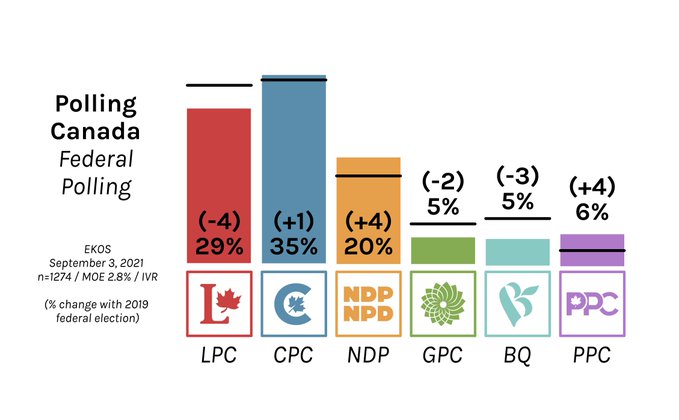 The PC conservative leader Erin Otoole is described as uncharismatic but at this point in time, he might be considered more honest and forthright than the vote hungry Trudeau or the socialist NDP leader Jagmeet Singh. The NDP have almost no chance of forming a government, but had the opportunity to work with the current Liberal government to create a majority for power. They didn’t because they don’t like Trudeau and his intent.

Trudeau’s anti-business intent combined with insane social manipulation goals via advertising media is making the country dysfunctional.  The bill for the Liberal extravagance will come in and if a recession does happen in 2023, the Liberals will be hated. You wonder why Trudeau would want to stay in office as interest rates rise and the bills starts piling up.

O’Toole’s calm approach and plans for vaccinations for the unvaccinated has put him in the driver’s seat to become the next Prime Minister of Canada.

If you’re voting in the upcoming Canadian election, remember the support your business community needs to compete today, and that more housing is needed to house millions of immigrants, keep prices down, and support Canada’s manufacturing industry.

See more about the Toronto real estate forecast and the Calgary housing market forecast.  2022 is coming soon and will be amazing if we have sensible leaders who believe in a real future.