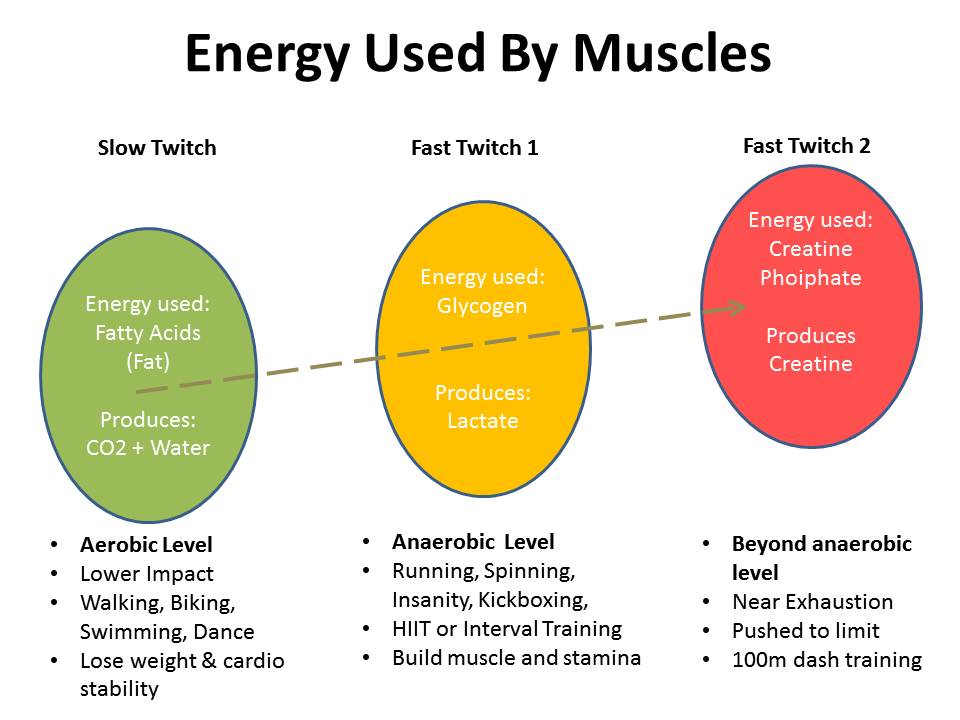 Did you know you have different muscle fibers in your body? It’s true. Scientists have discovered that not all your muscle fiber is the same. They’ve categorized the muscle type based on how fast the muscle contracts: slow twitch and fast twitch.

This is very important for you as an athlete because the type determines how well you’ll perform in various sports. If you train the wrong muscle type, you could see a performance drop. If you train like a body builder for instance, you might not do well in marathons, and not sprint very well either.

In the animal kingdom, a good example is a cheetah vs an ox. The Ox can move big weight a long distance, while the cheetah can run fast a short time.

Train the Muscle Type You Need, Not the Other

Fast twitch muscle evolved for short term, immediate actions like running from danger. Slow twitch evolved from hard work over long hours. For marathoners, slow twitch has plenty of oxygen and fuel. It’s a muscle that can bloat up like a balloon, which is why body builders train slowly.

In fact, at the local gym, almost no one trains fast twitch muscle. So if an olympic sprinter was to train in that fashion, their stride frequency would decline and their muscles would get too heavy.

In sprinting, the speed of your stride is more important than the power of the muscles. Of course, flexibility goes hand in hand with this too. Bodybuilders tend not to stretch, which makes the whole “beefing up” process highly questionable for athletes.

Mentally as well, fast twitch training makes your sense sharper and faster which plays into the speed scenario.

For those who want to see their muscles bloat up, slow twitch muscle development is what you want. With slow twitch you’ll see more muscle slow muscle fiber growth, and more water and blood drawn in, which is what makes them inflate like a water bottle.

Fast Twitch muscle use glucose as a fuel, which is better for high velocity sports. These muscles don’t carry much water, blood or oxygen so they fail quickly. If you want to last in longer duration sports, you’ll need to develop slow twitch which is what many football and hockey players do.

Most people have 50/50 split of these muscle types however through training you can increase one while letting the other type wither. It doesn’t mean one muscle type disappears. It’s still there, it’s just not being used.
Through training, sprinters, pole vaulters, and weight lifters might become powered by 80% fast twitch muscles. Marathoners and cyclists might become 80% slow twitch.

Some suggest there isn’t any difference in power but this can’t be true. When a slim 120 lb weight lifter lifts almost 4 times his own weight in a single lift, we know something is happening. Fast twitch allows more strength per millisecond which means it is stronger.

Fast twitch muscles are anaerobic fuel generators and fatigue quickly. They don’t need oxygen like the slow twitch fibers do. Sprinters are usually good for 100 or 200 metres, but they run out of oxygen and fuel quick.

If you go to the gym, you’ll notice that almost no one trains fast and hard. This means everyone at the gym is exercising their slow twitch muscles and building mass. Slow twitch are good for long distance runners, soccer players, hockey players, and swimmers.

When I began lifting weights more seriously in my 20’s, I did notice that it helped me run further especially up hill during a 1 hour run. Obviously, I was getting more oxygen and blood and wasn’t tiring as easily.  Slow twitch use fuel and oxygen more efficiently over a longer time period. Fatigue is less of a problem.

It makes sense that if you’re a sprinter or pole vaulter, you would not want to train slowly like others in the gym.

Track athletes should not train like this because it builds the wrong twitch muscle and weighs you down.  Good for football players, and sumo wrestlers, but not good for skilled athletics. One promising Canadian sprinter who almost broke the 10 second barrier thought he could improve by muscle building training. The reverse happened and he was never heard from again. Bad advice.

The key to athletic training is fast twitch muscle training as I described above.  You stay lighter and yet can generate much more explosive power at the microsecond you need to.